You are in: Home > Downfall

Downfall is still available, though with a modern edge. It has outlasted many other games and still proves a very strategic game for all the family. A strategy game of skill and cunning. Twist and turn the wheels to get your own coloured counters from the top to the bottom first. One false move could lead to your downfall. 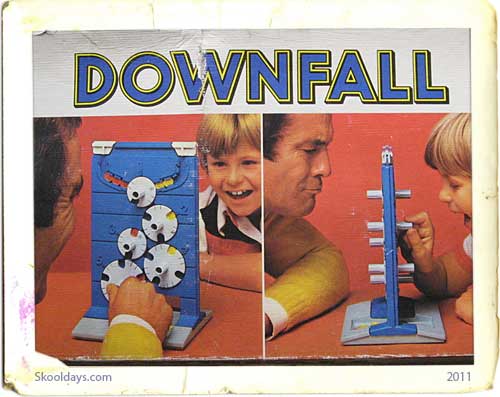 Downfall – A strategy game from MB

The players have between them a screen with five knobs in it. These knobs link chutes running from the top of the game to its base. The top chutes are loaded with your coloured discs in sequence (1 through 5). On your turn, you twist one of the knobs so as to move one of your discs down. The knobs don’t have the same indentations for either player, so you’re never sure if you’re helping the opponent or not.

First one to get his discs down to the base in sequence wins. You also win if you force the opponent’s discs to get to the base out of sequence. Several variants are offered in the rules.

This game was a classic
the advert used to say

“Get your counters down and block your opponent. Watch out, a wrong turn could lead to your downfall !!”