You are in: Home > Tupperware Zoo-it-Yourself

In 1966 these Zoo-it-Yourself set of plastic animals were released onto the teeth of ever toddler. They were a hit! Bright and colourful, cheery and adaptable we had loads of fun and what’s more they were so indestructable that they remain in your toy box forever (well until you decide to throw them out). 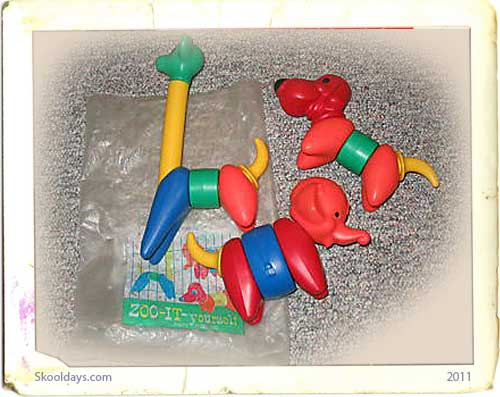 The Animals were made up of three animals: a plastic dog, an elephant and a giraffe. Each Tupperware animal composed of five interchangeable pieces: one body, two sets of legs, a tail and head, plus a neck for the giraffe. You could create a giraffe with a dog’s head, or a dog’s body with an elephant head on both ends, and so on. All the pieces are interchangeable.

They aren’t made any more but I’ve seen plenty on eBay while researching this childhood memory.