You are in: Home > Model Animals

Model animals for farms, zoos or circuses were always a part of childhood for me. Most toy shops had model sheep, cows, crocodiles or was it an aligator, giraffes, elephants, monkeys, pelicans and so on. Everyone needed a lion as he was king and nobody wanted the pigs and there was always one model that had a pig with piglets attached1 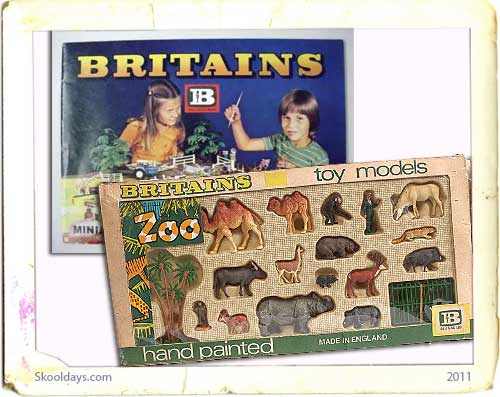 Model Animals for Zoos and Farms

Model Animals in a Zoo

A farmer or zoo keeper just about completed the set. I remember one of the hand-me-downs from my cousin consisted of plastic green zoo fencing that locked together and enabled several enclosures to be made, essential for any 1970s zoo and it made an ideal setting for a lion escape for the nearby lego built city!

Britains Limited was founded by William Britian, a toy maker from the West Midlands, England. Some 70 years later in 1997, Britains was brought by the ERTL, an American based Toy Corporation who have continue to develop the Britains brand name and will continue to do so for the years to come.

Did you have any models you were fond of or memories you would like to share? We would love to hear from you.