You are in: Home > Beetle Drive Game

The Beetle Game or Beetle Drive is a real family favorite.

Vintage Games seem to be big again with the impending Toy Story 3 about to find release again. Certainly Mr Potato Head saw a re-surge in sales and i just wonder when the Beetle will make it into a deserved spot on Toy Story.

The Beetle Game was made by Chad Valley in the sixties for 2 to 4 players.

The idea is to build a beetle from scratch by throwing a dice. The winner is the first player to finish ‘building’ their beetle.
Each Beetle part is one of four colours and each body part is made of plastic components which make up a 3D beetle. 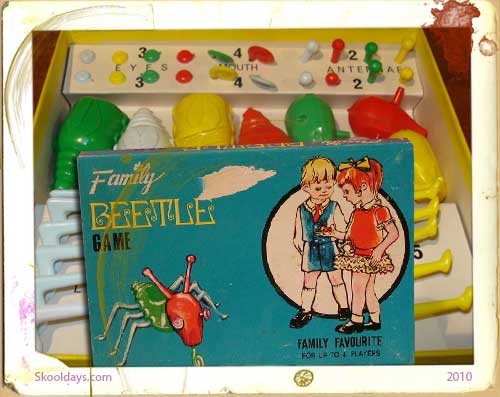 The Body parts were made up of a body piece, a head, 2 eyes, 2 antennae, 1 mouth and 6 legs, so in effect 13 pieces to complete your beetle.

Before too long several pieces disappear and it becomes the first person to complete the 5 legged one antennae beetle first!