You are in: Home > Scalextric

Scalextric started producing slot cars back in the 1950’s. The name came from the combination of Scale and Electric. This is what they were scaled cars motoring on electricity.

When i think of Scalextric myself, i think of asking the question, have you ever sucked your thumb? Well i have never sucked my thumb but at the age of four i did suck my middle fingers. Now that’s not a bad thing as it was this habit that scooped me my first Scalextric set. 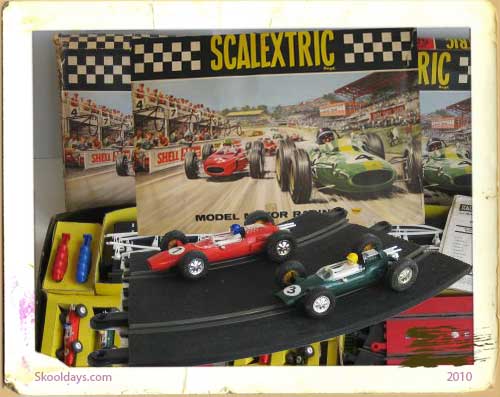 Mum and dad promised that if i kicked the habit, i could have any toy i wanted. Little did i know that i was destined to pick the toy my dad wanted… Scalextric Set.

To my dad’s delight we ended up with the Scalextric Set No. 50

The Scalextric set must of been from the mid 1960’s. It came with two Formula 1 cars, a green Lotus and red Cooper. The hand controllers were like something out of Star Trek and the large transformer would get so hot you could iron your cotton shirts with it after a few laps, normally the carpet started smouldering if you went for a 100 lap race!

One of the most memorable parts of my Scalextric days as a kid was the smell. That burning electricity or burning dust on the track is a smell that to this day has Scalextric written all over it.

Other memorable things i had as a child were the following:

In all, Scalextrics is awesome fun and a dream for every kid, though when TCR came along it all changed TCR (Total Control Racing) meant you could change lanes on your own accord. It promised a lot but disappointed, and Scalextric lived on.