You are in: Home > Matchbox Police Motor Cycle

Motorbikes were always disappointing as they never stood up. As soon as the momentum of launching them along the smooth hall carpet had slowed to a halt the bike would always fall over. This was never too satisfying and probably the reason i would stick to 4 wheeled cars as a kid. 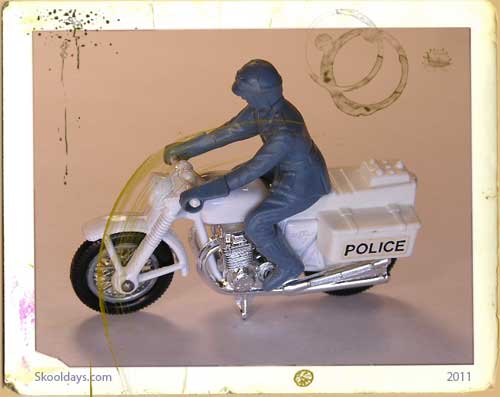 Though the Police Motor Cycle from Matchbox did win my heart as it had a detachable policeman. This Policman arrested all the other speeding cars and thereby became a key toy in most games. Problem is the detachable policeman had a permanent sit down stature so he looked a little silly unless he sat on his bike. Another diversion was the idea of turning into Evel Knievel for the day. While holding the handle bars he could sit on the front wheel while travelling and a few miles an hour without falling off.

Did anyone else have fun with the Police Motor Cycle?

It appears there were several models in the seventies.