These were the top cars to have in the 1970s

The yellow was part of the 1972-75 Formula 1 Racing Car, with its  blue bonnet stripe, no:16, four wide Superfast wheels. Model Marchbox Superfast 34d 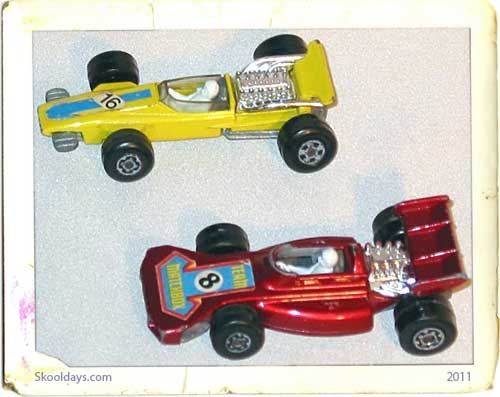 The red Car below was also part of 1973 Lesney No.24 Team Matchbox F1 Racer set

In the 1970s, adult collectors began to form semi-official clubs to discuss collecting at a higher level of sophistication. Variations were discussed and catalogued, swap meets organized, and new journals or bulletins began to appear, written by and for the serious collector. Not unlike stamps or coins, prices for older and/or more collectible models began to spiral upwards in a trend that continues to this day. Collecting is, however, not limited to the models themselves. Anything and everything having to do with Matchbox ― catalogs, dealer display cases, promotional literature, etc. ― is also avidly collected.

Clubs were the central force of Matchbox collecting in the ’70s and ’80s (though both have since ceased to exist), and from them, further spin-offs were formed, including UK Matchbox (run by Ray Bush), MICA (Matchbox International Collectors Association), and Matchbox USA, the latter of which are still in operation today.