You are in: Home > Ford sports car

This matchbox lesney Ford 6 cam in purple and green in 1969
It was a real favorite if used on the hot wheels loop the loop tracks. You know the ones where you drop them down a car track and do stunts. This car was a good scooper on the track. The real car had an open roof, which wasnt reproduced on the model.

You can see why Matchbox made this model as the car is a fine piece of sculpture – but as a car it was a complete failure, never finishing a single race. Number 45 in the 1-75 Lesney range is one of the few where there was no transitional model. 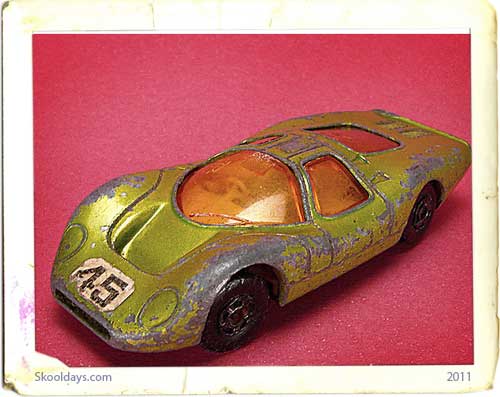 The Ford Corsair (45b) was dropped in 1970 and replaced with a brand new Superfast model – the Ford Group 6 racer.The Ford Group 6 (45c) was released in 1970 and some pre-production models are known in non-metallic dark green, during 1970/71 it was produced in metallic green, switching to metallic lime green in 1971 through to 1973 when it switched to metallic purple.