You are in: Home > Children’s Theater

Riber told Forrest that he would get $100.00 per show, which he would use to pay for the rental of films to screen on the show and he would be reasponsible for the creation,producing and presentation of the program’s format for the young viewers.

Forrest was delight with the idea of hosting a children’s tv variety show..but..when he found out that the only films that were availble for the program were old movie comedies and Paul Terry’s”Farmer Grey” movie cartoons.(The station execs told Mr.Forrest would have to provide music accompaniment and narrations for the films..but the films were racist and had too many sexual situations that were not for the kids) 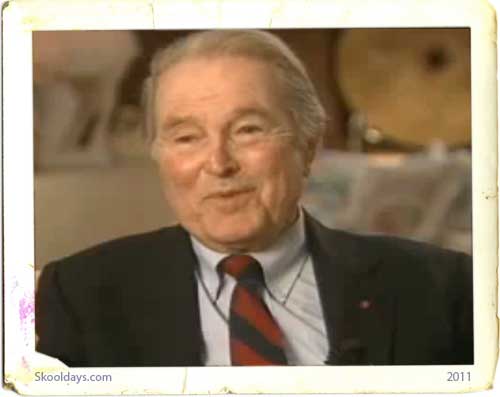 He refused to screen the films and he decided to screen The “Encyclopedia Britanica”educational film package instead. “Children’s Theater”debuted in 1949 and became a popular series with the kids and their parents..it remained on the air.

Until 1951, the heads of Ch.4 decided to drop the show and replaced with a daily talk/variety program hosted by Tex MacCreary and Jinx Falkenberg and aimed at an adult audience.

Forrest was going to be transfered back to the radio sports division of The NBC Network.Outraged,Forrest went to his boss Pat Kelly telling him that he was quitting tv and going back into the family jewlery business.Prior to his show being cancelled..The station execs told Forrest that since Tex & Jinx’ news series was not ready to go on the air.

“Children’s Theater” would air on Monday and Tuesday evening.Given a slight reprive..Forrest decided to speak with the parents at the conclusion of the tuesday broadcast.

In a April 12,1997 taped interview with tv historian and author:Jeff Kissloff..Forrest recalled”At the beginning of the program..I said ‘”Now Boy and Girls..later on in the program..I would like you to bring your mothers and fathers in,because I have
something to tell them.”

When the parents of the show’s young viewers tuned in to the end of the broadcast to hear Mr.Forrest’s message”For three years, I have been trying to give your children a decent tele-vision program that they can learn something from and still enjoy.If you liked it? (Please) don’t write to me..because I’m going to be back in the jewelery business with my family in New Jersey..but? If you liked It?..Write to the(TV)station and maybe they’ll do something like this for you in the future.”

Parents were angered about the show’s abrupt cancellation and they sent in complaints to the station execs at WNBT demanding it’s return.

Seeing that it was a mistake to drop the series..the heads of Ch.4 offered to move “Children’s Theater” to a saturday morning timeslot and expanded the format from 30 minutes to an hour.Seeing that he needed more time to prepare a better show for his audience.

Forrest asked to delay the show’s return until the following weekend. The station execs agreed and “Children’s Theater”became a popular weekend program.

Along with the games, craftmaking,hobbies, informational segments and inteviews with guest performers, personalities and members of the studio audience.

Forrest also did shows on location at Navy ships and planes and he screened his own films that he shot underwater to show his viewers life under the seas of the Florida Keys.He even did some shows from a blimp and inside a submarine.

The series also acquired The 1957 color “Crusader Rabbit” and “Pow Wow The Indian Boy” TV Cartoons and they were shown on the program.

“Children’s Theater” also took it’s viewers on a filmed trip to NYC’s most ambitious theme park “Freedomland USA” in 1960 and showed them how the park was built and how it operated and recreated events from American History.

Ray Forrest continued to educate, entertain and inform his viewers and studio audiences on “Children’s Theater”..until the heads of WNBC TV Ch.4 closed down the theater following the Saturday June 17,1961 broadcast.

Ray Forrest would retire from tv broadcasting following the cancellation of his series..but..the success of”Children’s Theater”helped to set the standards for other quality educational kids tv shows to follow.