Old Bottle tops and the incentive to get some money back by returning the empties for a small fee.

Bottle Tops were an every day item that would build up in the shed ready for a cashing in down the local newsagent. 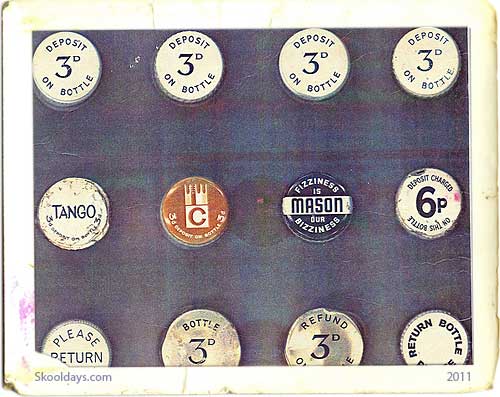 Selection of Bottle Tops from The UK

Ah Corona Bottle tops on the fizzy pop glass bottles – memories. Corona used to sell Cream soda which I loved but for some reason did not sell it in South Wales which was where I was at so if I ever went across the border to England,I always looked out for a bottle of Corona Cream soda. The range of pop we sold at the time was quite large with five diferent flavours in the litre bottle range which was orange,lemonade,cherryade,limeade(which was yellow)and dandelion and burdock.We also sold the tango range which was grapefruit,grapefruit and pinapple,orange,lemon,lemon and lime and I think that was it.We also sold vinegar(sarsons)in small bottles,cvit which is still sold today,shandy in large 25 oz bottles or small 9 1/2 oz bottles made by Idris and Cocacola in those swirly type bottles.Corona also had their own version of Coke called,Blank memory,I think it was called Coola or something like that.
That was a quick way to gain pocket money!
Who else remembers Corona and Tango bottles in the seventies?