You are in: Home > Spinning tops

Spinning tops
Most kids before computers would remember getting dizzy watching a spinning top. A top, or spinning top, is a toy that can be spun on an axis, balancing on a point. This motion is produced by holding the axis firmly while pulling a string. An internal weight then rotates, producing an overall circular motion. 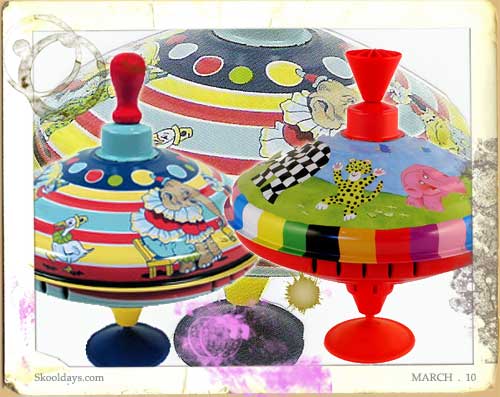 Typically the top will at first wobble until the shape of the tip and its interaction with the surface force it upright. After spinning upright for an extended period, the angular momentum, and therefore the gyroscopic effect will gradually lessen, leading to ever increasing precession, finally causing the top to topple in a frequently violent last thrash.

Tops of the sixties and seventies would often have a mechanism in them to enable the spin to happen due to pushing a gear action in the central column of the top. Many had an additional wind noise harmonising at certain points of the spin.

The action of a top relies on the gyroscopic effect for its operation.
Spinning tops came in all sorts of sizes and made of all sorts of substances, but for my childhood i love the tin ones that made the harmonising noises and upset everyone around you, wicked boy that I am!