You are in: Home > Whistle pop candy

Whistle pop candy sweets! These whistles were actually a boiled sweet lolly, tasty and zingy, with various fruity flavours. Various flavours i can remember  include lemon, cola and strawberry. But the real reason you bought these were for there value for annoying parents. While you can suck, you could also blow your whistle at a high pitch screech, so loud that streams of dogs would arrive outside your house, like the Pied Piper of Hamelin in the dog world!

This whistle pop would give you a good 30 minutes of whistling depending on how you drooled. Popular in the late 1970s and early 1980s. 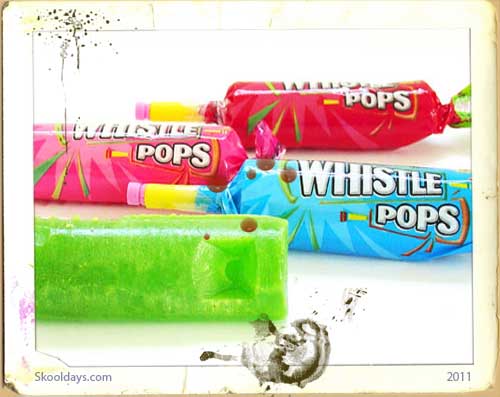 Whistle pop candy from the 1980s

Not to be confused with the hard sherberty and chalky Candy Whistle.  The Candy Whistle was a similar type of whistle but had a little less clout. The Whistle Pop though had a great advert with it.  A large globule of hard candy on the end of the stick, that you had no option but to lick and suck until it became small enough that you could place it between your back teeth and crunch it up.

A reminder of how annoying the Whistle pop became for parents…