You are in: Home > Shirt Tales

As part of our look at the top 5 Saturday morning cartoon shows Shirt Tales comes in at 5
This Favorite Saturday Morning Cartoon animation is a real mid 1980s classic.

Shirt Tales was a cute little cartoon by the Hanna-Barbera studio during the mid 1980s. It first aired on September 18, 1982 and finished January 21, 1984 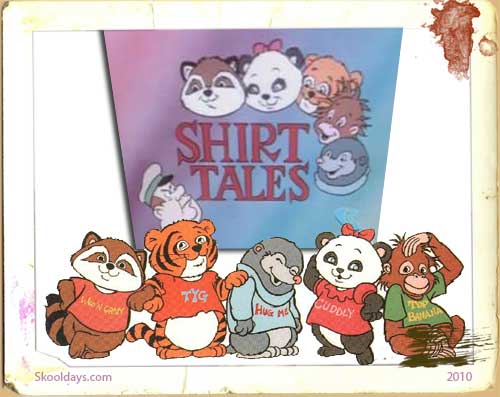 The concept for the cartoon started life off as a greeting cars. Janet Elizabeth Manco a greeting card designer, found popularity with her card design with Hallmark. The characters on the designs made there way into the animation studio a few years later and ran for 23 episodes over 2 seasons during 1982 to 1984

With various coloured shirts, the cartoon showed them living in Oak Tree Park and wore shirts which flashed various brightly lit messages reflecting the characters’ thoughts. They spent their time teasing the park ranger, Mr. Dinkle, and battling crime in and out of their hometown of Mid City.

The animals shirts would randomly proclaim things such as “Hug me” or “Let’s go!,” usually hinting at the current mood of the various “Tales.”

One fan of Shirt Tales insisted it is one of the greatest show of the 1980s. They beleive a cartoon studio should look at this nostalgic series and have a new version of the series air for the 21st century generation. It’s not for babies they claim, it’s for everyone. If He-Man, Teenage Mutant Ninja Turtles and other show get revived, then why not Shirt Tales?

Anyone remember the “Shirt Tales’ Super-Sonic Transporter”, which not only helped them get around quickly, but also sported a laserlike beam that functioned as a lasso or a ladder.

Do you remember Shirt Tales?
Did we miss any of your memories about the cartoon?