You are in: Home > Visionaries: Knights of the Magical Light

Back in September 21, 1987 the 4th favoritie cartoon went out on air and lasted until December 14, 1987. Although only one season, it’s still a real favorite Saturday Morning Cartoon animation.

Visionaries – Knights of the Magical Light is a half hour animated television series from 1987. It is based on the action figure toy line of the same name by Hasbro. Only 13 episodes were produced by Sunbow Productions, and were released on Region 2 DVD in 2004. There was also a short-lived Comic_book series published by Marvel Comics – it lasted only 6 issues, and was cancelled mid-way through a 4-part adventure.

Visonaries toys were also marketed for a period of time 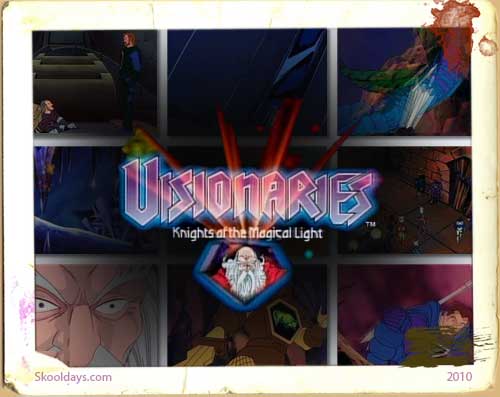 Also a set of visionaries DVDs were released.
DVD Episodes were:

Visionaries was a big hit during its first few episodes but was later axed because it only has 13 episodes running repeatedly for a a few months. Visionaries: Knights of the Magical Light was originally a range of action figures from Hasbro, released in 1987. This action figure range was promoted by two different media, telling the stories of the characters. The better known of the two was a half hour animated television series made by Sunbow Productions in the same year, but there was also a comic book series issued by Star Comics.

Set on the planet Prysmos, the Visionaries consist of two groups of knights — the Spectral Knights and the Darkling Lords, both of whom have their magical powers gifted from Merklynn after successfully completing a quest to reach Merklynn’s shrine on Iron Mountain. Each character had a different animal totem power that reflects their personality by allowing the knight to temporarily transform into that animal.

The Spectral Knights characters were:

The Darkling Lords in Visionaries included:

In addition there were Sun Imps and several other characters.

1 thought on “Visionaries: Knights of the Magical Light”