You are in: Home > Sabrina

Your 3rd most popular animated series is Sabrina

The Sabrina Animated Series had over 60 episodes from September 11, 1999 up to February 27, 2000 this was one really popular series. Of course this was based on the Archie Comics character Sabrina, the Teenage Witch, a popular comic book series published by Archie Comics about the adventures of a teenage fictional character named Sabrina Spellman. 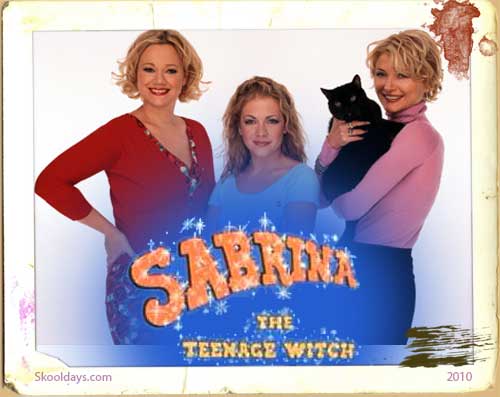 Sabrina Series comes in at 3

Sabrina, the Teenage Witch DVD Starring Melissa Joan Hart, Caroline Rhea, Beth Broderick was released in 1996. The Sabrina DVD is still available at Amazon here and is a must for fans. Gets some great reviews : Definitely worth buying, Sabrina starts to look like a very enjoyable and original series!

As in the original comic series, Sabrina lives with her two aunts, Hilda and Zelda Spellman, and Salem Saberhagen, Sabrina’s sarcastic cat, all of whom advise Sabrina on the use of her powers.
It was often noted the two aunts little resemble their comic counterparts in appearance as Hilda becomes a brunette, while Zelda’s hair is turned reddish-blonde in color.

Sabrina’s Secret Life also aired on Disney. Although, Sabrina’s Secret Life was set during her high school years, Sabrina’s magic was portrayed as weaker. She was also an outcast with other witches due to her half witch status. Unlike the previous series where Sabrina made magic with a wave of her hand and a incantation. She now started using a wand to cast spells similar to the Harry Potter series. Most of the original voice cast did not return for this series. All characters had very significant design changes and most of the old show’s characters vanished without reason.

Do you remember Sabrina or any of the spin-offs?
What memories do you have about the Sabrina series?