You are in: Home > Laurel and Hardy – This is your life

Laurel and Hardy -This is your life was a very special moment as they were beginning to loose the amount of public appearances as the years caught up with them.

Early 1950s Laurel and Hardy took several months off, so they could recuperate. They then traveled to Europe and undertook a successful series of public appearances in short sketches Laurel had written: “A Spot of Trouble” (in 1952) and “Birds of a Feather” (in 1953) 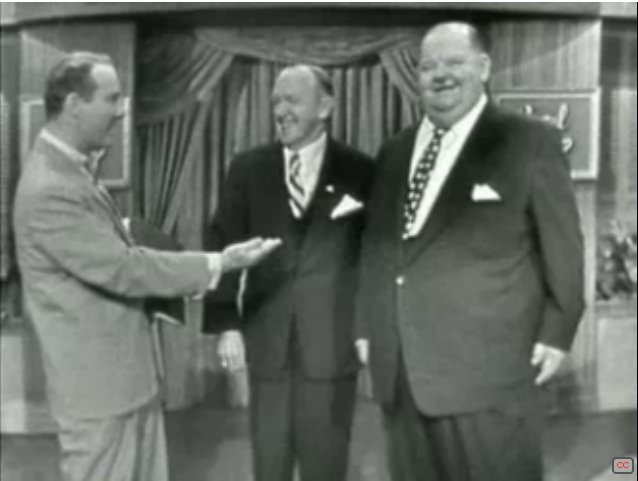 In 1954 on 1st December, they made their only American television appearance, surprised by Ralph Edwards on his live NBC-TV program, This Is Your Life. Lured to the Knickerbocker Hotel as a subterfuge for a business meeting with producer Bernard Delfont, the doors opened to their suite #205, flooding the room with light and the voice of Edwards. The telecast was preserved on a kinescope and later released on home video. Partly due to the positive response from the television broadcast, the pair was renegotiating with Hal Roach Jr. for a series of color NBC Television specials to be called Laurel and Hardy’s Fabulous Fables. However, plans for the specials were shelved, as the aging comedians suffered from declining health.

Laurel and Hardy – This is your life Preserved

Thanks to television, Laurel and Hardy came back into popularity in the 1950’s, shortly before Oliver Hardy’s death in 1957. They have remained in the spotlight ever since, proving that as much as tastes in comedy may change, the sight of a skinny man and a fat man smacking each other around will always be funny.

Worth noting that Ricky Gervais puts a lot of his initial success from studying Laurel and Hardy. The main influence for Gervais was the “camera look”. Hardy said “I had to become exasperated, so I just stared right into the camera and registered my disgust” Gervais implemeted this in main of his fly on the wall mocumentry like The Office.

This Is Your Life

1 thought on “Laurel and Hardy – This is your life”