You are in: Home > Multi-Coloured Swap Shop

Multi-Coloured Swap Shop was a Saturday morning magazine programme that was screened  for 3 hours. Never had the BBC broadcast a show as long as 3 hours unless it was a sporting advent.

Swapping was often not allowed at school and Ebay wasnt even a concept, so this was in effect a eBay style show of moving on old toys and games for new. A live car boot for kids. With famous people swapping things too it was all very special in its day.

Reminiscent of the American Banana Splits show, this UK programme was a recipe of several mixtures sprinkled with cartoons and pop music and videos.

Presented by Noel Edmonds along with Keith Chegwin or “Cheggers”, (who later went onto his own 80s show “Cheggers Plays Pop”) Maggie Philbin and John Craven for the News section.

The cornerstone, however, was the Swaporama element, hosted by Cheggers, who was very rarely in the studio. An outside broadcast unit would travel to different locations throughout the country where children could swap their belongings with others. This proved to be one of the most popular aspects of the show, often achieving gatherings of more than 3,000 children. 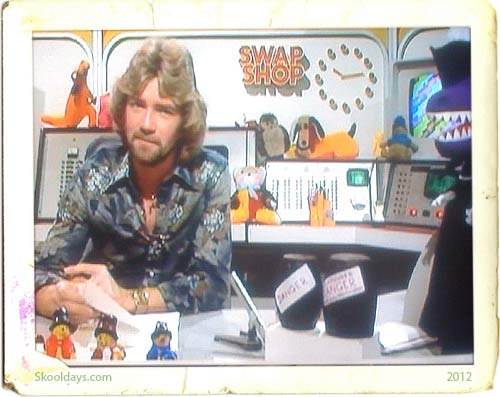 John craven had some horrific jumpers and swapped them on one swap shop broadcast.
Posh Paws the purple dinosaur (which is the words Swap Shop backwards) also featued heavily on the show.

Swap Shop finished in 1982 and was replaced bt Saturday superstore with Mike
Read. Also like Swap Shop, it was a show accessible to kids via a phone in. But it never quite had the cutting edge that Multi-Coloured Swap Shop brought to our screens in the 70s and 80s