The Commodore 64 is an 8-bit home computer released by Commodore International in August, 1982, at a price of US$595. Preceded by the Commodore VIC-20 and Commodore MAX Machine, the C64 features 64 kilobytes (64×210 bytes) of RAM with sound and graphics performance that were superior to IBM-compatible computers of that time. 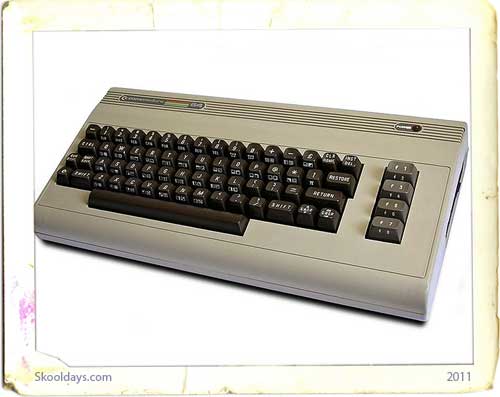 The Commodore 64 is commonly referred to as the C64 (sometimes written C= 64 to mimic the Commodore company logo) and occasionally known as CBM 64 (Commodore Business Machines Model number 64), or VIC-64[1]. It has also been affectionately nicknamed the “breadbox” and “bullnose” due to its shape.

During the Commodore 64’s lifetime (between 1982 and 1994), sales totalled around 30 million units, making it the best-selling single personal computer model of all time.Sam Tramiel, a former Commodore president said in a 1989 interview “When I was at Commodore we were building 400,000 C64s a month for a couple of years.” At one point (1983/84/85), the Commodore 64 dominated the market with approximately 40% share, even outselling IBM PCs and Apple computers. Part of its success was due to the fact that it was sold in retail stores instead of electronics stores, and that Commodore produced many of its parts in-house to control supplies and cost.

Approximately 10,000 commercial software titles were made for the Commodore 64[citation needed] including development tools, office applications, and games. The machine is also credited with popularizing the computer demo scene. The Commodore 64 is still used today by some computer hobbyists, and various C64 emulators allow anyone with a modern computer to run these programs on their desktop.