They were the days….
Useless without its 16k Ram Pack

One reader said “If you had an extension pack you had to hold it in place with Blu-Tack, because if it wobbled a bit you’d lose everything”

As with the ZX80, the processor was a NEC Zilog Z80-compatible, running at a clock rate of 3.25 MHz, but the system ROM had grown to 8192 bytes in size, and the BASIC now supported floating point arithmetic[1]. It was an adaption of the ZX80 ROM by Steve Vickers on contract from Nine Tiles Ltd, the authors of Sinclair BASIC. The new ROM also worked in the ZX80 and Sinclair offered it as an upgrade for the older ZX80 for a while. 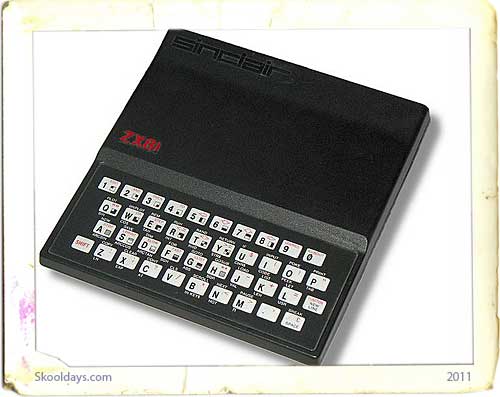 As suggested, the computer was similar to the ZX80, but was built around a semi-custom Ferranti ULA (Uncommitted Logic Array) instead of TTL logic. The redesigned system board therefore had only four or five ICs: the microprocessor, the ULA, the 8192 bytes ROM, and either one 1024 bytes RAM chip, or two 1024×4 bit RAM chips.

A 16-KB RAM pack that plugged into the rear of the ZX81The base system as supplied (in the UK for approximately GB£70 fully built and GB£50 as a kit requiring soldering, or US$100 in the US) had 1 KB of RAM. This RAM was used to hold the computer’s system variables, the screen image, and any programs and data. The screen was text only, 32 characters wide by 24 high. Blocky graphics with a resolution of 64 by 48 pixels were possible by the use of the PLOT command, which ingeniously selected among a set of 16 graphics characters.

To conserve memory, the screen bytes were stored as minimal length strings: for example, if a screen line was only 12 characters long, it would be stored as only those 12 characters followed by the code for a new line, the rest of the line being automatically assumed to be spaces. Using this knowledge, it was common to write programs that kept to the top left of the screen to save memory. As another memory-saving feature, BASIC keywords were stored as 1-byte tokens. If memory grew short, the number of lines displayed on the TV screen would be reduced.

Even so, there were many games and applications that ran in the minimalistic 1 KB, including a basic game of Chess. It was not that hard to get to know, understand, and control the computer completely, something almost impossible with the computers of today.

The ZX81 was used as an analogy in the Comedy cult series Red Dwarf (S05E01 – Psiriens) in exclamation that their ship had survived a collision and crash landing wholly intact “Starbug was made to last, sir. This old baby has crashed more times than a ZX81”