You are in: Home > Children’s Television

Watch with Mother which included Andy Pandy, Muffin the Mule, the Wooden tops and Poggles woods to name a few, were often the first tv memory kids had in the sixties and seventies. 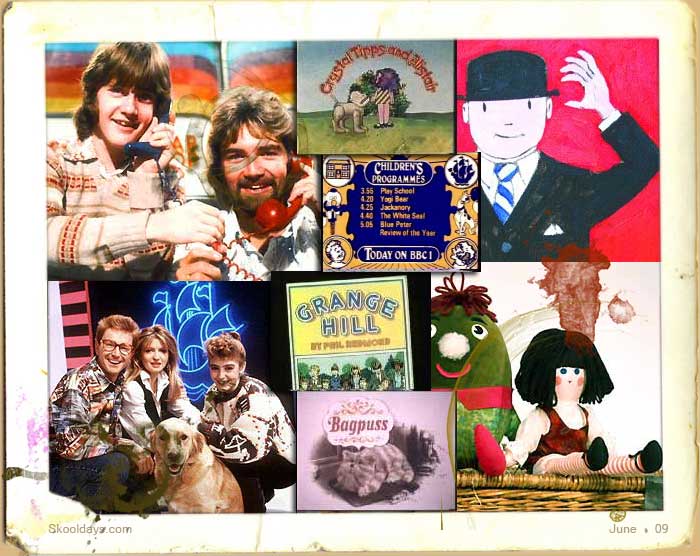 For many years there was little else except this lunch time treat. Then the after school slot kicked in in the early seventies where Play school generally kicked things off. The format on BBC was pretty much the same for many years. Around 4pm Play School which had already been aired earlier in the morning around 11am on BBC2 now headed the BBC 1 childrens TV spot.

After playschool there would normally be a cartoon of 5 mins from several sources. Crystal Tips and Alastair, Huckleberry hound, Whacky Races, Pixie and Dixie with Jinx the cat, all shared this 5 minute spot.

Then Jackanory made the next section and stayed there for years and years, unless it was Bernard Cribbens it was switch off time. A time to start chewing on my Jam and Marmite mixed sarnies.

John Cravens Newsround came in for a quick 5 minutes of news. This slot was made to make the news pallatable for kids and it really worked.

The next slot was a little open depending on what day it was, it was normally around 20 to 30 minutes. Tuesdays and Thursdays were Blue Peter, other days would be some type of series like Grange Hill, or The Tomorrow People, Dramas such as The Changes, or more exciting shows like Crackerjack and Cheggers plays pop, also Roy Castles Record Breakers were on for many years. Mixed in with the previous list were other cartoon like Scooby Doo or several other Hanna Barberra treats like Hong Kong Phooey, Josie and the Pussycats, The Funky Phantom and so on.

Children’s Television before the news

Finally the last 5 minutes was occuppied by another 5 minute cartoon or animation such as Ludwig, the Magic Roundabout, The Wombles, Sir Prancelot and Captain Pugwash. By then Dad was home and everyone was about to settle down for the news – that was so boring as a kid!