You are in: Home > Ultimate Top 3 Pop Culture Urban Legends – unless you know different!

We have decided to put together the ultimate list. We know we can’t get everything right first time, so we are asking you to also add to the list if you think we missed something.

Pop Culture – shortened form of “Popular culture” is the culture — patterns of human activity and the symbolic structures that give such activities significance and importance — which are popular, well-liked or common at the particularly time period. Popular culture is deemed as what is popular within the social context — that of which is most strongly represented by what is perceived to be popularly accepted among society. With a world full of newspapers, magazines and internet as well as radio and television it is often defined or determined this way.

Urban Myth also known as Urban Legend – Bearing in mind that its not neccessary for it to derive in an urban area or a big city. Normally it involves a narrative and is alleged to be true, because its plausible enough to be believed it often keeps its legend status as and gradually snowballs as it becomes attributed to trustworthy secondhand sources. 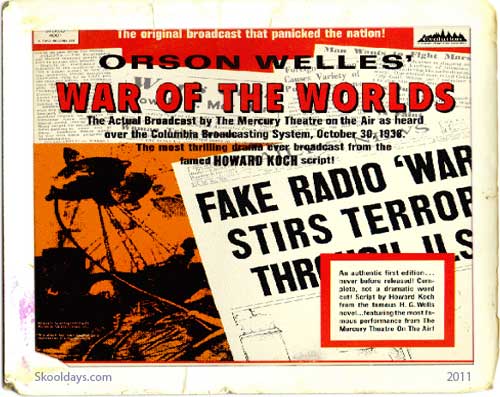 #1 The War of the Worlds
The War of the Worlds was an episode of the American radio drama anthology series Mercury Theatre on the Air. It was performed as a Halloween special on October 30, 1938 and aired over the CBS Radio network. As it wasn’t a commercial newtwork at the time there were no adverts and therfore it really did sound like a complete news bulletin.

The first half of the 60-minute broadcast was a series of news bulletins, which suggested to many listeners that a Martian invasion was in progress. Some fled their homes; others were terrified. The news-bulletin format was decried as cruelly deceptive by some newspapers and public figures, leading to an outcry against the perpetrators of the broadcast, but the episode launched Orson Welles to fame.Directed and narrated by Orson Welles, the episode was an adaptation of H. G. Wells’ novel The War of the Worlds.

#2 The ATM Reverse-PIN to trick a thief
The most-forwarded Urban Myth gave claim to some insight in the banking world on a reverse-PIN system and inside knowledge about the workings of an Hole-in-the-wall cash ATM.

The Urban legend claimed that there is a hidden safety feature whereby users can quietly alert police of an attempted robbery by entering their PIN (personal identification number) backwards. This has never existed and on paper its inventor claims it would reduce crime with widespread use, but the technology has yet to be implemented anywhere in the real world.

#3 Bill Gates due to Tax reasons has to give some of his fortune away – you can help
This logic-defying email hoax is now years old and still going strong as it breeds on peoples get-rich -quick appetite. As originally composed, the purported message from Microsoft founder Bill Gates promised thousands of dollars to each and every person who helped him test his new beta software by forwarding it to everyone they know – sounds like a chain letter to me. Further versions included dodgy news reports about mergers taking place between AOL, Microsoft, and Intel.

Of course rumours of Yahoo merging with Microsoft aren’t a myth – well unless you know different!