You are in: Home > Mamma Mia – Will Abba get more popular than the Eighties?

When i was at school admitting you liked Abba was like saying “Hey Bully-Boy, i fancy a beating”. Yes no-one would dare admit in the school playground that it was a foot tapping good song from the top pop group.A few decades later and the queen of pop Madonna has admitted that she wrote a grovelling letter to Swedish superstars Abba asking if she could sample their music on her latest single.
Madonna said: “They had to think about it, Benny and Bjorn. They didn’t say yes straight away.” 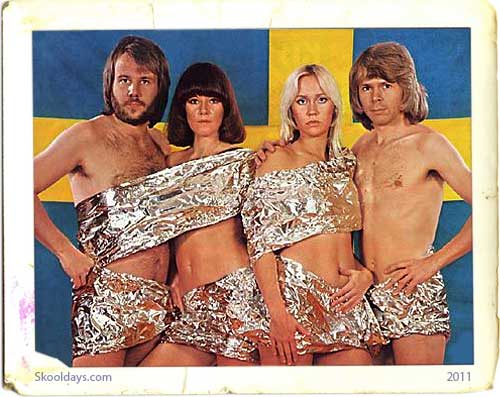 Mamma Mia - Will Abba get more popular than the 1980s?

The movie “Mamma Mia” based on Abbas music is hitting the box office and having raving reviews. Wow Abba are now getting what they deserve and even the School bully has started download “Dancing Queen” on i-tunes!

It seems Abba are almost as popular today as they were in the late Seventies and early Eighties. In 2008 they really are suddenly Super Troopers in the modern world. Who would of thought that when Agnetha Faltskog bumped into Anni-Frid “Frida” Lyngstad and Benny Andersson and his best mate Bjorn Ulvaeus got together that they would become the legend they are.

Abba became international superstars during the late 1970’s with a string of immaculately-crafted pop singles that, even by modern standards, seem to leap out of the speakers at the listener. Songs like “Dancing Queen,” “Waterloo” and “Winner Takes it All” encompass everything thrilling about pop music: lush vocal harmonies, bouncy melodies with catchy choruses, and hooks galore all wrapped in a big, glossy sound that never fails to thrill. This magical sound made Abba one of the most successful pop groups of all time.

Simplicity is certainly there strength as the music sounds simple yet a very quick study reveals a much deeper combination of chords giving each song a hidden depth. Yet the name ABBA couldn’t be any easier. Simply put : the first letter of their first name! Few groups personify pop music the way Abba does.

Although Abba gained their international fame quickly once they broke through in the mid-70’s, it was a long climb to the top. All four members had a long and involved history in European pop music before they began performing together. The beginnings of Abba date back to the first meeting of Swedish songwriters Benny Andersson and Bjorn Ulvaeus. They soon became writing partners and began penning Swedish hits. During this time, they wrote songs for Agnetha Faltskog and Anni-Frid ‘Frida’ Lyngstad. Soon enough, the two twosomes became a pair of married couples and began recording singles together in 1972, starting with piano-driven “People Need Love.”

Abba earned their breakthrough in 1974 when they won the Eurovision Song Contest with “Waterloo.” This driving pop tune compared a bad relationship to Napoleon’s famous defeat and boasted a big wall-of-sound production fuelled by guitar, piano and saxophone. It became a worldwide hit and went Top-10 in the U.S. Abba followed it up in 1975 with another U.S. Top-20 hit in “S.O.S.,” an ultra-catchy tune that contrasted keyboard-led ballad verses with a powerful guitar-driven chorus. Abba also continued to build their international fan base with classics like “Mamma Mia,” a pulsating slice of pop that highlighted a unique xylophone hook on its chorus.

In 1977, Abba scored their biggest international hit with “Dancing Queen.” This tale of a girl finding joy on the dance floor cleverly fused Abba’s frilly European pop style to an up-to-date disco beat to become a #1 smash in the U.S. It also topped the charts in several other countries, including England and Germany. Abba also hit the Top-15 that year with “Knowing Me, Knowing You,” a power ballad lamenting a love gone bad. The hits continued in 1978 with the early synth-pop of “The Name Of The Game” and “Take A Chance On Me,” the latter a danceable love song with unusual, rhythmic ‘stuttered’ harmonies. 1979 saw the group experimenting with disco once again on songs like the Top-20 hit “Does Your Mother Know?”

Abba in the Eighties

In 1980, Abba scored a surprisingly serious Top-10 hit with “The Winner Takes It All,” a bittersweet power-ballad about the end of a romance. The heart-tugging lyrics were a direct reflection of what was going on in the group: Both couples were in the process of splitting up. Abba continued on for a few more years as they developed a sleek, synth-pop style on albums like Super Trouper and The Visitors. They continued to score worldwide hits with danceable tunes like “Gimme Gimme Gimme (A Man After Midnight).” At the end of 1982, Abba brought an amazing decade of success to a close by splitting up.

Since then, both Agnetha Faltskog and Frida Lyngstad have enjoyed success as solo performers. Lyngstad scored a big hit in 1983 with “I Know There’s Something Going On,” a drum-driven pop tune produced by Phil Collins. Benny Andersson and Bjorn Ulvaeus have continued to work together as composers and found international success with their musical Chess, which featured a worldwide hit in “One Night In Bangkok.”

Meanwhile, Abba’s classic pop continues to weave its magical spell on pop fans everywhere and has been covered by artists as diverse as U2 and Sixpence None The Richer (including an all-Abba-cover EP from Erasure). All in all, Abba’s legacy of hits and their unerring knack for melody ensure that they will always be legends of pop music.

More recent times have seen even the Magic Madonna jumping on the Abba bandwagon using some great Abba backings to her recent track Hung Up. This of course takes Gimme Gimme Gimme. This is only the second time Abba have allowed another act to use their work.
“I had to send my emissary to Stockholm with a letter begging them and telling them how much I love their music,” Madonna said.

“They never let anyone sample their music.”

Songwriters Benny Andersson and Bjorn Ulvaeus have only allowed one other act to sample one of their tracks before, when the Fugees used part of The Name Of The Game on their 1996 track Rumble In The Jungle.

1 thought on “Mamma Mia – Will Abba get more popular than the Eighties?”