You are in: Home > Tinker’s Workshop

During the run of “Time For Fun”..Bob Keeshan..the first host/ performer of the series felt that there should be a quality educational tv program for children.

After seeing the success of a local children’s series in the Cincinatti, Ohio viewing area “The Uncle Al Show”..Keeshan and the director of “Time For Fun”..Jack Miller approached the programming director of WJZ TV Ch.7 in NYC..Adrian Rhordan with the request to create, produce and present an educational kids tv show for the station’s weekday morning schedule. 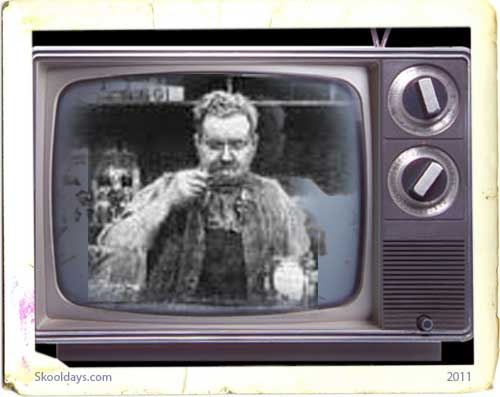 Tinker's Workshop with Bob Keeshan as the Toymaster on Weekday mornings

Rhordan balked at the concept and the series remained on the shelf until the fall of 1954. When after several failed attemps to try and present a successful kids tv show for their weekday morning timeslot.

Rhordan gave Keeshan and Miller’s concept the greenlight for their program.

Working feverishly during the weekend..the pair and the station’s crew created a set,costume,some instant grey hair dye and scripts and using music from the Ch.7 record library. “Tinker’s Workshop”opened for business on Monday morning November 15,1954.

Set against the backdrop of a toyshop in a swiss village..”Tinker” a kindly old toymaker would use his playthings to teach his young customers (his viewers)important values and engage them in stories,craftmaking, games, hobbies and informational segments wrapped around reruns of old movie cartoons and comedies.

Keeshan would continue to educate,entertain and inform his viewers as”Tinker The Toymaker”..until the summer of 1955..when Mr.Paley and the heads of CBS TV approached them to create a educational kids tv show for their weekday morning scheduale.

Keeshan and Miller decided to try and create a better format..where Keeshan would play a kindly old tour guide and captain of the guards of a children’s museum called”The Treasure House”. CBS TV liked the show but..the heads of WJZ TV made it clear to Keeshan that they still owned the rights to the format and the character of “Tinker’s Workshop”and the refused to let Keeshan out of their contract with him.

After consulting with Keeshan’s manager:Marvin Josesphson..The station execs at Ch.7 bought out the rights to “Tinker’s Workshop”..Keeshan left “Tinker’s Workshop”following the friday September 9,1955 broadcast and he went onto a successful 29 year stint as CBS TV’s primer kids tv educator.

Former burlesque. radio and stage comic/character actor, dialectician and storyteller: Henry Burbig was hired to succeed Keeshan as the show’s second host/performer and instructor. He began mc’ing the program on Monday September 12,1955..but..Burbig’s humor was too risque for the young viewers.

He also relied on too many mechanical gimmicks for his comedy and he didn’t seem to have a genuine rapport with the kids.

The station execs saw that they needed someone else to host the show..they found him in a talented,creative and likeable fellow named Gene London.

A Former camp counselor and radio and community theater performer.Gene London made his debut on NYC TV as the puppeteer on a weekday evening children’s series”Little Tom Tom At The Wigwam Party”on WOR TV Ch.9 In NYC back in the early 1950’s. He also did
puppetry for Herb Sheldon’s NYC based kids tv programs on WNBT TV Ch.4 and on WABD TV Ch.5.

In 1957..prior to Herb Sheldon’s abrupt departure from Ch.5..London left to work with Shari Lewis on her weekday morning kids tv show at Ch.4..”Hi Mom!”.

When Ms.Lewis was unavailable for a weekly broadcast..Gene was hired to sub for her.His talents on the program came to the attention of one of the station execs at Ch.7. Impressed with his talents and his rapport with the kids.

He was invited to audition for the hosting stint on “Tinker’s Workshop”, he won the audition and in Early January of 1958..Gene London took over the workshop.

Unlike his predicessors..he didn’t portray an elderly toymaker..instead. He took on the role of a gentle and engaging fellow who made toys and encouraged creative play and learning as a big brother type of character.

Gene’s version of “Tinker’s Workshop”became an even bigger hit with the kids and he became one of the first local NYC kids tv mc’s to appear in The Macy’s Thanksgiving Day Parade.

Yet? Gene felt that the old movie cartoons and comedies that he presented to the kids were not appropriate for the viewers and
he complained to the station’s new programming drector: Alvin Hollander.

Hollander angrily told London”Get The Hell Out Of here..You’re Fired!”.

Gene London left the show in mid 1958 and he was replaced by clown:Dom Deluise.

A former stage performer..Deluise had made his tv debut on Joe Bova’s Cleveland,Ohio based kids tv show”Uncle Joe’s Tip Top
Clubhouse” in the early 1950’s.

When Bova left Cleveland for NYC to become the second mc of WJZ TV’s and Wilson and Powers'”Time For Fun”..Deluise went with him in the hopes that he would continue in his status as the show’s puppeteer and comedy asistant.

When the pair arrived in NYC..Powers and Wilson auditioned and hired Bova but they didn’t hire Mr.Deluise.

The station did invite him to audition for”Tinker’s Workshop”, he won the audition and Dom Deluise would continue to educate, entertain and inform his young customers..until the station execs at WABC TV Ch.7 closed down the workshop following the Friday
August 22,1958 broadcast.