You are in: Home > The Smurfs

It had to happen in 2011, The Smurfs make it as the next big movie to hit the screens this summer. For years The Smurfs have been loved by generation after generation, but now they make it to the big screen again. We say again as in 1976 they made it with the The Smurfs and the Magic Flute

Cartoonist Pierre Culliford (known to the world as Peyo) debuted the Smurfs in 1958 in Belgium’s Le Journal de Spirou. The rest is Smurf history.

As cheesy as many of the lines are, there’s a certain self-deprecating humor about “The Smurfs.” The movie pokes fun at the Smurfs’ trademark “la-la” singing, their personality-based names and their use of the word “Smurf” in almost every conversation. 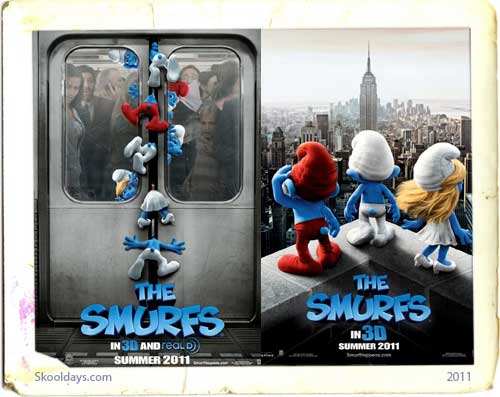 But it was clearly done with a knowledge and love of the characters and their creator, Peyo, the beloved Belgian cartoonist. But that cleverness is marred by toilet-humor scenes that feel shoehorned in just to get the film a PG rating.

Everything went Smurf in the 1980s – they were on cereals, gas, adverts, chocolate bars, you name it the world went Smurf-itus Perhaps the most memorable feature of the show was the use of the word “smurf” in every possible tense and construction. For instance, it wouldn’t be unusual to hear a Smurf remark something like, “It’s such a smurfy day, I think I’ll go smurfing in Lake Smurf.”

But right back in 1958 you could see the Smurfs growing in popularity, but only in the 1980’s did the Smurf-mania take a grip. Even Smurf dolls became collectable from Schleich, Applause and Irwin

1 thought on “The Smurfs”