After hosting “The Finder”for Educational TV station KCET TV Ch.9 in St.Louis, Mo. for six months.Sonny Fox was invited by one of the producers of The CBS TV Network to host a simular children’s tv news magazine and travelogue. 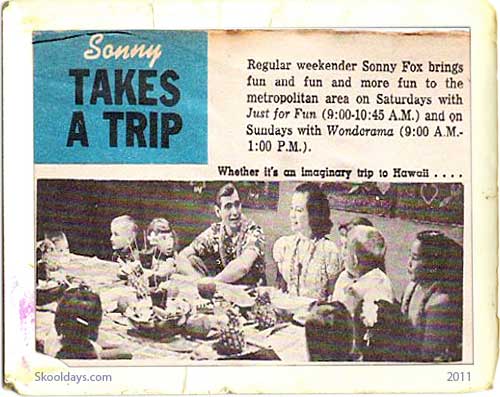 He accepted the offer and he returned to NYC to talk with the network’s head of the public affairs department..Irving Gittlen.

Gittlen had acquired a kinnie film of one of Fox’ programs ..where he took his viewers on a trek to The Lindberg museum and after watching the episode he felt that Fox had the talent and sincre personality to mc the network’s kids tv show.

He was hire and “Let’s Take A Trip”debuted on The CBS TV Network on Sunday afternoon April 17,1955.

Every week Sonny and his two young traveling companions Ms.Ginger Macmanus and Mr.Brian(“Pud”)Flannagan would take their viewers on trips to such locales as”The American Ballet Theater Co.”..where they would meet and discuss dance techniques with the famous choreographer:George Ballenchine, Attened the 1955 “Toy Fair”,join in a Boy Scouts Jamboree and even meet President Harry S.Truman.

The show became very popular with young viewers and it was also praised by parents and teachers.However..by 1957..Fox would have to hire two new traveling companions.

Ms.MacManus had outgrown her role and she was forced to leave the program..instead of hiring one new young traveling companion.

The producers replaced both MacManus and Flannagan with Joan Terrance and Jimmy Walsh.

The trio continued to take their viewers on more video treks..until the network execs decided to cancell their reservations following the Sunday February 23,1958 broadcast.

Ginger MacManus would mc one more children’s tv series..when on Monday evening September 15,1958, she became the first host/peformer of WOR TV Ch.9 NYC’s”Looney Tunes Show”. Which she would mc weekday evenings..until she left the show following the Friday January 9,1959 broadcast.And she was replaced Monday evening January 12,1959 by Paul Tripp

Sonny Fox would go onto briefly serve as the mc of the prime time tv game show “The $64,000 Challange” and then..he would go onto greater tv fame as the fourth and most memorable host of WABD/ WNEW TV Ch.5 NYC’s sunday morning kids tv variety show “Wonderama!”.