You are in: Home > Lego alternatives

For many years it’s been top of every child’s construction toy. Even the mighty Meccano seems to play second fiddle to Lego. So today while we look at Lego alternatives from the current market, I also want to identify my very first Lego alternative from the 1970s. 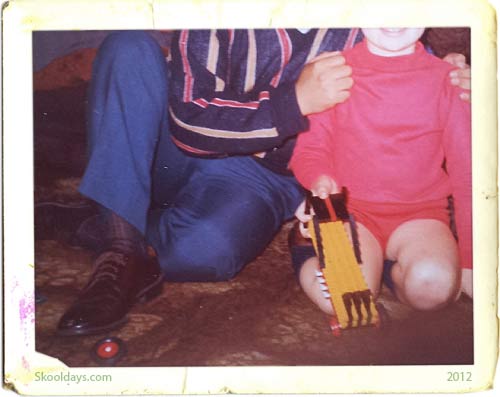 Update: The guys at http://www.doyouremember.co.uk/ managed to identify it as Philips Philiform – well done guys it is exactly that. Not compatible with lego, but certainly the construction toy of my 70s generation.

With your help and an old picture i found the other day, can anyone recognise or even name this lego alternative. The key elements of the cross between Lego and Meccano were the following:
Red spoked wheels were added to the construcion using white pins. There were grey pipes used to link pieces together.
The main colours were black yellow red and green. The sets i owned were purchased around 1975 in the UK

Here are some other lego alternatives  I’ve ruled out

Mega Bloks : Ideal for little builders. Mega Bloks Primary Colours come in a chunky set of 70 big and colourful building blocks in a bag. You can build anything you can think of. You can build with the colourful blocks on their own, or use them with other Mega Bloks sets. When you’ve finished your days building, the blocks easily pack away into a flexible PVC bag for easy carrying and storing. Mega Bloks are a great way for encouraging creativity for young children.

SuperBlox :  SuperBlox are the ultimate building block, providing a quality and colorful block for hours of creative building fun. Set includes instructions to build a functional play environment, or use the blocks to build whatever your imagination desires!

Nanoblock : Nanoblock are a very good lego alternative. It’s a mico-sized building block system with its smallest piece being a mere 4mmX4mmX5mm.  Challenging and fun for all the construction enthusiasts in the family, nanoblock lets you build in greater detail than ever before.

Fischer Technik : In 1964 Fischer Technik was another construction toy from Germany. With motors and various additions it almost encouraged home made robotics. The basic building blocks were of channel-and-groove design, manufactured of hard nylon. Basic blocks came in 15x15x15 and 15x15x30 millimeter sizes. A peg on one side of each block could be attached into a channel on any of the other five sides of a similar block, producing a tightly-fitting assembly that could assume almost any shape. Red cladding plates could be used to complete the exterior surfaces of the models.

So we identified the picture as Philips Philiform

Why not comment below on any suggestions as to the Lego alternative you had as a kid?