You are in: Home > Whistling Jack Smith – I Was Kaiser Bill’s Batman

Remeber the Whistling Jack Smith? Any fan of Hot Rods under the umbrella of Spedeworth short circuit racing in the UK would also be aware of this great tune. Once again it was played as a warm up lap anthem and continues to get played at race meetings throughout the country.

But the song itself is covered in mystery. Who actually whistled it? Who is Jack Smith? Why Kaiser Bill’s Batman?

Yet its very uncertain who actually whistled this song. With its international success, the hit single “I Was Kaiser Bill’s Batman,” was whistled but the whistler is unknown.

The record producer Noel Walker hastily brought out several more singles followed by an entire LP bearing the title Around the World with Whistling Jack Smith, later issued in the U.S. and Canada as Whistling Jack Smith — The Original I Was Kaiser Bill’s Batman. 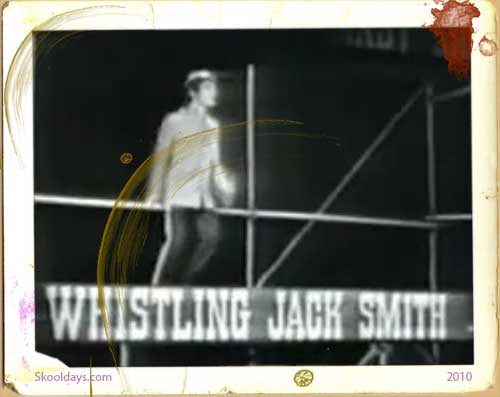 Billy Moeller was used as the face of the whistler and performed under the name of Coby Wells when he wasn’t appearing on television and throughout the international media as Whistling Jack Smith. But the record industry has never agreed that he was the original whistler!

It’s more likely to have been John O’Neill (1926 — 1999). He was a professional musician born in County Durham, England to Irish parents. He was famous for his whistling abilities.

However the exact nature of who Jack Smith was is unsure; certainly in TV appearances an actor lip-synced whistling to a backing track, and some sources attribute the single to British Decca/Deram producer Noel Walker, as producer and performing artist.

For me its an awesome anthem and says I’m about to drive a Hotrod fast around a circuit!