You are in: Home > Lois and Clark – Superman

Lois and Clark:The New Adventures Of Superman by Kevin Butler

In the early 1990’s..lawyer,executive TV producer and scriptwriter Deborah Joy Levine decided to do a new version of the “Superman” saga as a prime time series for ABC TV.

Unlike the 1950’s series..which was a crime drama (Which later on..became a light hearted kids tv adventure show) seen in national syndication.Ms.Levine’s concept was a romantic comedy..with some dramatic undertones.

And..in this series..the main character was not “Superman”..but his earth like alter ego “Clark Kent” and his relationship with “Lois Lane”. Thus Lois and Clark. 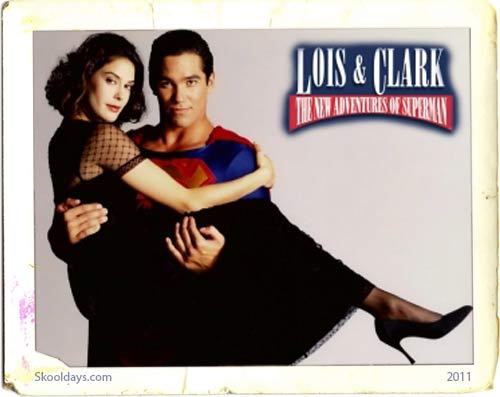 After creating the script for Lois and Clark..and selling the program to Warner Brothers..Ms.Levine cast the show..the roles of the two leads went to Actress/singer and dancer Teri Hatcher (Ms.Hatcher’s only other tv appearances was on “The Lois Boat” as one of “The Dancing Mermaids”)and former collage football player turned actor Dean Cain.The supporting roles went to K Callan and Eddie Jones(Who played “Clark Kent’s foster parents),Lane Smith (who took on the role of”Perry White),Michael Landes became “Jimmy Olsen” and John Shea played “The Man Of Steel’s”arch foe “Lex Luthor”.(Landes would leave the series at the of the first season and the role of”Jimmy Olsen” was played by Justin Whalen for the remainder of the series’ run).

(Shea’s “Luthor”was portrayed on the show. Not as a mad scientist/inventor but as a corrupt and ego tripping business exec)

After screening the pilot at The Comic Con in Southern,California. To great success with the fans. The series was picked up by ABC TV for their Sunday night schedule.

“Lois and Clark” debuted on Sunday Night September 12,1993..the first show a two hour episode had our caped superhero..preventing the destruction of a space station and beginning his relationship with “Lois Lane” and finding out about “Luthor’s” sabotage of the space station and warning him that he will prevent any further evil deeds that the villian will perpitraite.

The series became a hit and every week the show looked at the development of the relationship between the two reporters..Ms.Hatcher played “Ms.Lane” as a tough, no nonsense journalist..who would do anything to get the story.

Even if it ment trying to outscoop “Clark”..which often created some friction between them.

Mr.Cain’s interpretation of his character was one..where he wanted to simply fit in with the people of Earth and fully understand..why he was there on our world and what his purpose is?

On The February 20,1994 episode titled “Foundling”…”Clark Kent” found out about his origins..when he found a strange, glowing globe…that spoke to him about his birth on the planet “Krypton” and that he was sent to Earth by his real father”Jor-El” (played by stage and screen villain David Warner)to save him from the destruction of their planet.And to prevent crime and aide the people of Earth.”

The globe was stolen by two street kids for monies from “Luthor” and it took alot of doing..but our caped supercrime fighter did get his globe back..without his foe learning his secret and “Mr.Kent” helped out the two lads..by getting one of them a job as a copy boy at  “The Daily Planet” and enrolling the young boy into one of the best schools in “Metropolis”.

The series also introduced live action versions of other super villians from “The Superman comic books” : “Metallo”,”The Prankster”,The Toyman”, and “Mr.Myxyspitilik “were seen on some episodes (Bronson Pinchot.. best remembered by fans of ABC TV’s “Perfect Strangers” as”Balki” played the trouble making “Prankster” and Howie Mandrell was the imp from the fifth dimension.Sherman Hensley and later Grant Shaud played “The Toyman).

Eventually..The relationship between the two reporters was challenged by romantic rivals (An actor played an ego tripping and conceited FDA investigator named “Scardone”..who tried to capture “Lois’ “heart..but in the end..she rejected him) and “DA Mayson Drake”..who tried to capture”Clark’s”heart..but she was killed by mobsters..when she find out about their secret process to bring crooks back from the dead) ,their being teamed by “Perry White” and “Lois”having trouble coping with “Clark” disappearing during a crucial assignment.

Eventually,”Lois Lane” finally found out about her partner’s secret at the start of the episode “We Have A Lot To Talk About” (Which aired on Sunday September 17,1995)..”Lois” found out by the way “Clark” touched her with his super strong hand.She was not happy about his deceiving her and it took a long time and quite a few episodes..before she finally accepted his proposal of marriage.

It took even longer for our favorite couple to tie the knot..for poor “Lois” was captured,got a bad case of amnesia and was brain washed by “Luthor” (Who was granted a pardon by the fake president of the USA)..who sort to not only marry the girl reporter..but also to destroy “Superman” and “Clark Kent”.

Luckily..”The Man Of Steel” foiled his evil plot and “Luhtor” was finally killed in an artificially created earthquake.

“Clark” was also harmed by a crazed perfume manufacturer..who created a shampoo..which made it’s victim shrink.(This was seen in the episode “It’s A Small World After All” which aired on Sunday April 28,1996)

Despite all of the trials and tribulations that they endured.. “Lois and Clark”  finally did marry on The episode “Swear To God..We’re Not Kidding”(Which aired on Sunday October 6,1996 with Comic/ character actor David Doyle playing a kindly angel named “Mike”) Unfortunately.

The marriage of Lois and Clark took away the romantic tension and the plots became more like crime dramas with some comedy added to it.

During the show’s fourth and last season..”Lois and Clark” was moved to a saturday night time slot.where it limped along in the ratings.

During this time ABC TV was bought by The Walt Disney Company..which wanted to change it’s line up of shows.

There was talk of “Lois and Clark” being picked up for a fifth season..but the heads of Walt Disney/ABC TV had no desire to keep the program on the air.