You are in: Home > Come Along

In the early 1970’s actor/scriptwriter/producer and dialectician; Joe Early created/produced and performed on a unique children’s tv program titled”Come Along!”

Early..who was noted for his portrayil of Dr.Benjamin Franklin on local tv shows and in stage productions in The Philadelphia,Pa. area..would portray famous men from history.who would spend some with some kids..talking about their lives,their careers and their accomplishments in history. 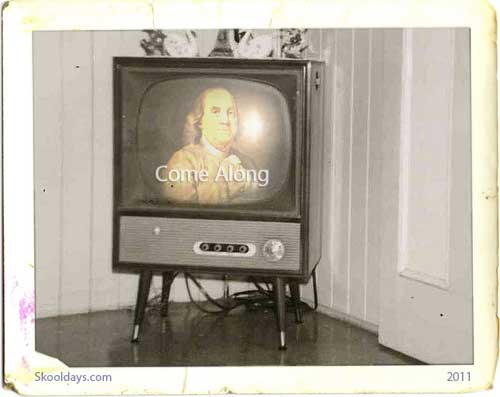 Unlike most historical recreations (EG:”You Are There”)..Mr.Early didn’t want to simply show the kids what these people had done in their careers..he wanted the young people to see them as ordinary people..who had charm and a sweet personality that kids could look up to and enjoy.

He also wanted the kids to learn via conversations and exchanging information from the two generations.

The series was first seen in Philadelphia, Pa. on The ABC TV Affillate there..later the show went into syndication..beginning on Sunday evening January 21,1972.

The remainder of the shows were taped in the studio.

The series lasted one season in first run episodes..they were later rerunned for a time..and then they were withdrawn from syndication.

Mr.Early would portray famous men from history on another historical recreation series…this format”Meeting Of The Minds”hosted and created by Steve Allen and his wife Jane Meadows Allen was aimed at a more adult viewing audience.

1 thought on “Come Along”