You are in: Home > Tickle Me Elmo

Tickle Me Elmo is based on the character Elmo from the children’s television show, Sesame Street.

Tickle Me Elmo was invented by Ron Dubren and Greg Hyman, two veteran toy inventors. In 1992, They had no intention to make it a sesame character until toymakers Tyco lost  the rights to do Looney Tunes but gained the rights to Sesame Street, thus starting Tickle Me Elmo. 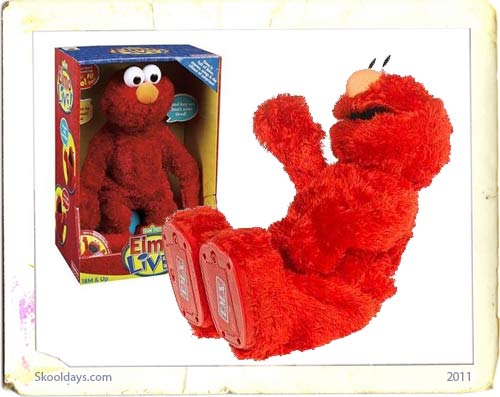 The Tickle Me Elmo craze began innocently enough in 1996 when inventor Ron Dubren saw a couple of kids playing in the park. Watching the youngsters tickle each other until they erupted in giggle-fits, Dubren got the idea to create a stuffed animal that would react in a similar way when tickled by its owner. He created a stuffed monkey with an electronic computer chip housed in its stomach that would produce a “giggle” when it was tickled. Most toy companies passed on the toy, but one company kept Dubren and his idea in mind. Tyco liked the doll, but were forced to pass on it because they did not make plush dolls at the time.

Back in 1996 the frenzy for the toy turned into another shopping mob scene, with parents acting like children for there children and Elmo toys fetching thousands of pounds on ebay. Tyco released Tickle Me Elmo just in time for the holiday shopping season of 1996. Although Elmo dolls had been available long before Tickle Me Elmo, the new toy quickly became popular. This popularity got a shot in the arm when celebrity Rosie O’Donnell prominently featured the doll and sung its praises on her talk show. The constant television exposure she gave it transformed Tickle Me Elmo from a popular toy to a full-on craze.

Newer version of the toy have appeared. For instance the T.M.X. Elmo. This Elmo doesn’t seem all that grand. He looks like Elmo. Covered in the soft red fur that one would expect from everyone’s favorite Sesame Street character, T.M.X. Elmo stands an unimposing 14 inches tall. Even worse, he feels all hard and plasticy under his fur. But this Elmo is not meant for cuddles or hand holding or swaddling.

Elmo slaps his belly, falls forward with his butt sticking out, stands back up again only to topple backwards, kicks his legs over his belly, and then stands right back up, all while laughing hysterically. Thank goodness there is an on – off switch!