Its a Mad, Mad, Mad, Mad World was one of my favorite films as a kid.It was a 1963 American comedy about the madcap pursuit of $350,000 in stolen cash by a diverse and colorful group of strangers.

Why did I love it so much?
Well apart from the fact i loved treasure hunts and car chases, i also loved the strength of each character. Edie Adams as Monica Crump, wife of Melville Crump. There was Sid Caesar as the dentist Melville Crump. Mickey Rooney was a comedy writer known as Dingy ‘Ding’ Bell and Buddy Hackett as comedy writer. Who can forget the character played by Ethel Merman namely Mrs. Marcus. She was the battle-axe mother-in-law of J. Russell Finch.
Phil Silvers was the out-of-work piano player Otto Meyer and of course Terry-Thomas as Lt. Col. J. Algernon Hawthorne. Spencer Tracy as Captain C. G. Culpeper of the Santa Rosita Police Department. Jonathan Winters was the chubby truck driver Lennie Pike

Its a mad mad mad mad world was an incredible movie for so many reason. 182 minutes movie back in December 1963 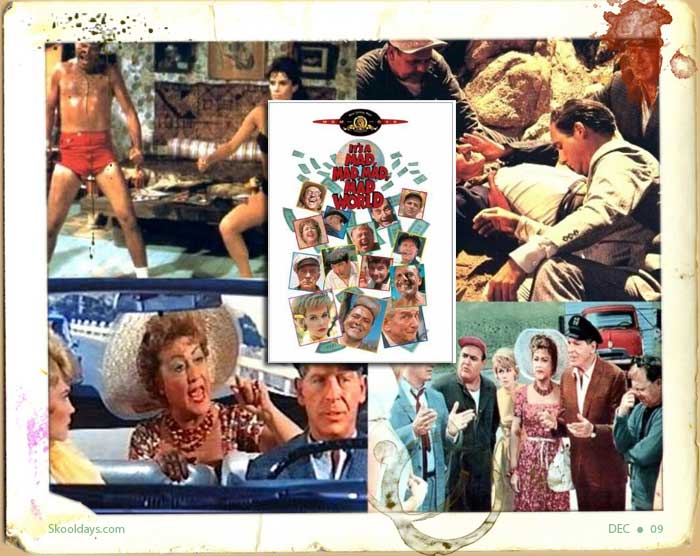 The story kicks off with four vehicles that are passed by a speeding black sedan on a lonely highway in Southern California. The sedan falls over a cliff. They find the chap from the wreckage and under his dying breath, about $350,000 hidden in the state park in the fictitious city of Santa Rosita, less than a day’s drive away, under a mysterious “Big W”.

The story is now ready to play out as a true treasure hunt takes place over the coming 24 hours. It’s a Mad, Mad, Mad, Mad World is the Magnificent men in there flying machines but on the road. Or more accurately it is the Wacky Races in the real world.

Similar to the story of chicken licken and henny penny, It’s a Mad, Mad, Mad, Mad World has a continuous introduction of new characters along the way as the secret of the treasure becomes known to further characters joining in the mad cap chase across to the national park.Bikes and Planes are involved, garages collapse, people get locked up in warehouses and others get incredibly side tracked. The buried money is eventually found under a group of four palm trees that have been planted to resemble the letter “W”.

Unfortunately the ending in my mind is a bit weak, its the getting there that made the film. often true in real life too. Ask Del and Rodney from only fools and horses.