You are in: Home > 00 – The Mean Machine – Dick Dastardly and Muttley

Dastardly driving  Mean Machine Zero-Zero with his side-kick Muttley the Dog. Dick Dastardly and his Mean Machine 00 in a mock-up race on the race track at the 2006 Goodwood Festival of Speed. Notably, in the Cartoon film “Wacky Races,” Dastardly is the baddie. 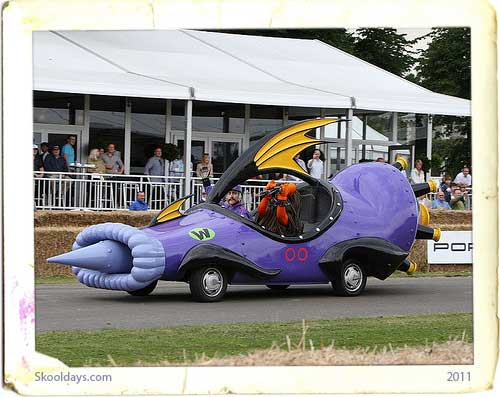 All the way from Goodwood, The Mean Machine appears to have been by far the fastest vehicle, providing Dastardly with a theoretically unbeatable advantage. But in every episode, after blazing far ahead of the others, Dastardly would stop to set up various booby traps for the other racers and this would eventually cost him the race. It never seems to occur to him to race fairly even though he would presumably triumph every time.

Can you believe – the real Wacky Races!