You are in: Home > Dinky Bedford Refuse Truck

Now who remembers the Dinky Bedford Refuse Truck?
It was clunky and almost indestructible – on that basis it lasted longer than almost any other car in my banger collection – unfortunately i didnt respect cars in those days – everyone was entered for constant destruction derbys – though this was by far the hardest! 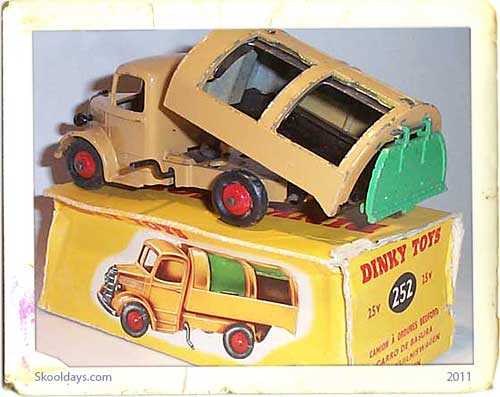 This Dinky Bedford Refuse Truck model was made by Dinky, made in the 50’S and is of diecast construction.

There are some working parts on the Dinky Bedford Refuse Truck. It’s is fitted with two green sliding shutters and a crank operated tipping body with opening rear door renumbered from No25v.

Also known as The Dinky Bedford Refuse Truck. Released October 1948, priced at 5/6. It was fitted with sliding shutters and a crank operated tipping body with opening rear door. Re-numbered from No25v to 252 in March 1954, still priced at 5/6. In June 1955 it cost 5/10. Then windows added in late 1960. Last appeared in the January 1964 catalogue with a price of 7/11. Inflation! It was available in tan/green, orange & grey finish.

The truck can fetch around £20 these days yet it was listed in the 1954 Meccano magazine as original price of 5/6.