You are in: Home > Zoobilee Zoo

Zoobilee Zoo is a programme that became popular in the eighties.They made 65 episodes over 15 years.

The actors dressed up in animal costumes thus the name zoobilee zoo. The animals has a specific behavior that gives him a unique view on each problem faced. 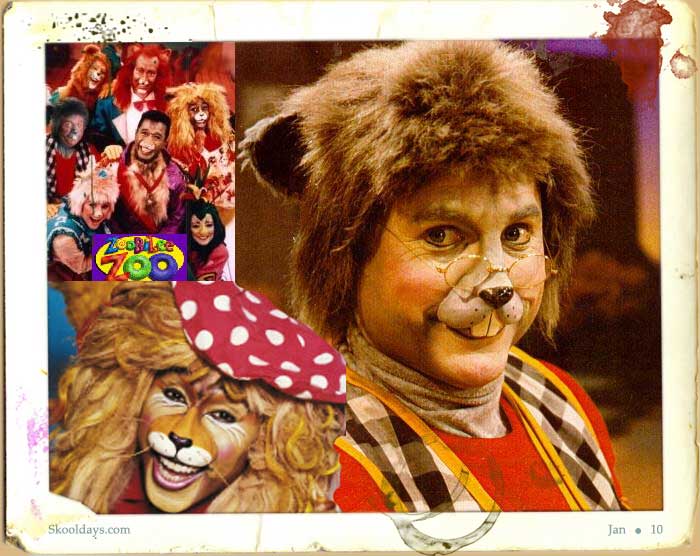 Zoobilee Zoo from the 1980s

The main characters were called Zoobles.
Characters included Bill Der Beaver, Van Go Lion, Talkatoo Cockatoo, Lookout Bear, Bravo Fox, Whazzat Kangaroo and Mayor Ben. They would generally have a problem and then use a moral to solve the problem. So it proved a useful teaching tool for kids and parents.

The show still proves to be popular as many child likes to reminisce on the programme, even though the animal people were pretty creepy.

Let us introduce the Zoobles to you…

I’m Mayor Ben, I’m here to lend a helping hand
I’m Builder Beaver – I invent things on command
There’s daring and adventure when Lookout comes to call
And a kangaroo named Whazzat who puts music to it all
My name is Van Gough the Lion, just color me fun
And you will shout, “Bravo” once the show has begun
Everyone spread the news.
There’s so much to see and do
Just see Talkatoo
When you’re in Zoobilee…

Zoobilee Zoo
Zoobilee Zoo
Magic and wonder are waiting for you
So come on with us now
We can discover the wonder of you.
Welcome to Zoobilee Zoo
Closing Theme

Zoobilee Zoo
Zoobille Zoo
Magic and wonder are waiting for you
It’s as close as a dream
And is bright as the brightest blue
See you in Zoobilee Zoo.

Leave it to Beaver Lunchbox