You are in: Home > Trumpton

Trumpton came in 1967 after the success of Camberwick Green and its musical box device at the start of each episode. Trumpton was narrated by Brian Cant and shown on the BBC from the 3 January 1967. There was only ever 13 episodes made each around 10 minutes long. Soon after the team made a third animation series called Chigley

Trumpton was an imaginery Town which became famous for the Fire Brigade and the roll call “Pugh! Pugh! Barney McGrew! Cuthbert! Dibble! Grubb!”. Trumpton not far from Camberwick Green. Each episode begins with a shot of Trumpton Town Hall Clock, “telling the time, steadily, sensibly; never too quickly, never too slowly; telling the time for Trumpton”. 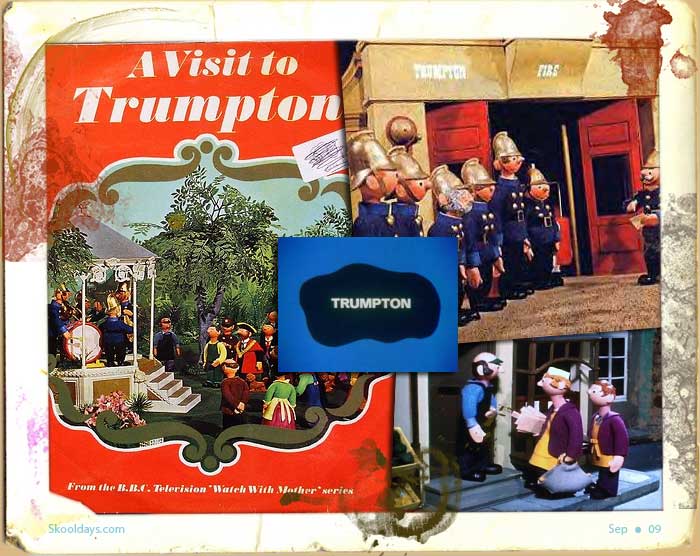 Trumpton was an imaginery Town

The townsfolk then appear and go about their daily business. These include the Mayor, Mr Troop the Town Clerk, Chippy Minton the carpenter and his apprentice son, Nibbs, Mrs. Cobbit the florist, Miss Lovelace the milliner and her trio of pekingese dogs, and Mr. Platt the clockmaker.The story is all about a variety of domestic problems which are resolved by the end of the show, leaving the last minute or so for the Fire Brigade to become the Fire Brigade Band and play the episode out.

The 13 episodes in order are: