You are in: Home > Evel Knievel Chopper

1976 Ideal Evel Knievel Chopper Motorcycle.This amazing toy from Ideal took the stuntman to a new level. The basic Evel Knievel Motorcycle and figure came out in 1976, it was quickly followed with the Scramble Van, Chopper, Dragster, Stunt Car and SkyCycle. There was also different outfits and accessories sold too. 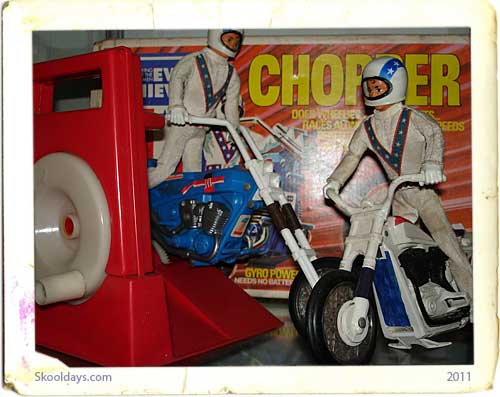 Evel Knievel was a seventies superhero of the era. It seemed like there was no stunt that this daredevil wasn’t ready to take on as he piloted an array of cycles, cars and rockets over huge piles of vehicles, the fountains at Caesar’s Palace, and even the Grand Canyon itself. No matter how many bones he broke in the process, this warrior in an American Flag suit always got back on his feet to face the next stunt challenge. In the process, he inspired millions of people and became a world-famous celebrity. Boys loved him for his spectacular failures as much as his triumphs and often nodded to each other in satisfaction as they mutually fetished the rumor that Evel had, at one time or another, broken every bone in his body.

Now unless your parents were dirt rich and dripping in gold, you were lucky to get one of these toys in a liftime, tet alone a Dragster, skycycle and chopper. also the advert must of had several cuts as there was no way the Evel Knievel Choper could keep upright for that long – it was scientifically impossible.