Mazogs. Anyone who had a ZX81 probably had Mazogs too.

In the early 80s, well 1981 to be exact, UK kids either had a Vic 20 or a ZX81. The ZX81 had Mazogs, a good reason to go for Clive Sinclair’s machine. The Vic 20 had a great arcade reproduction of Pacman. Soon kids were hooked on the gameplay rather than graphics of Mazogs. With no choice of anything other than basic graphics a lot was left to the imagination, but Mazogs it was an enthralling game at the time!

The aim of the game was to work your way through the random maze, collecting swords to overpower the Mazog monsters and releasing prisoners while making your way out of the maze and collecting the treasure.

The key to the Maze symbols included:

X is a Mazog, P is a prisoner, S is for Sword, T is for Treasure

The beauty of the Mazog game was the fact that each game was different. There would be a random maze drawn and thereby providing a different adventure each time 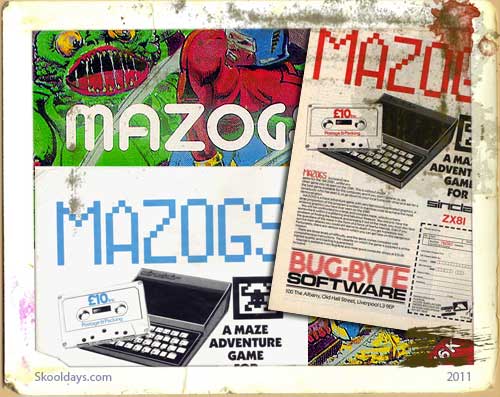 Don Priestly was the brains behind Mazogs. With a freelance association with software house BUG BYTE, he produced two classic ZX81 games, Dictator and Mazogs. Dictator was the first of the banana republic trading simulations. Why was Mazogs so popular? Mazogs created a real stir in June 1982. Don explains; “I was trying to get away from all those games which revolved around a dollar sign being chased by an asterisk. Mazogs featured large mobile sprites in a solid maze, all constructed using Sinclair’s sugar cube graphics. It was my first game which got itself a full page advert”.

The follow on on the ZX Spectrum or in effect the ZX-82 was Maziacs published by DK’TRONICS – basically Mazogs in colour, but the game play was lacking.