You are in: Home > Tubby The Tuba

This Disney LP from the early 70’s may bring some childhood memories to you all for Tubby The Tuba had a tough tale to tell! 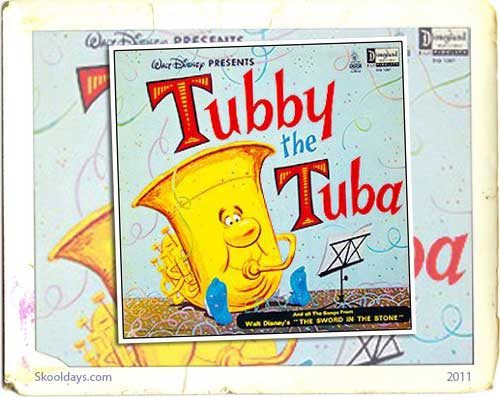 The story told via the 2 sides of the LP is about Tubby, a tuba in an orchestra who is fed up with playing the same two notes all the time and follows his adventures as he goes in search of a real melody to play for once in his life.

Tubbys journey is full of sorrow, disappointment and yet more disappointment along the way. Just as soon as you think, OK enough now, whens the happy part coming? Something sad happens again. There is a token happy ending however which is quite unconvincing.

Tubby does have depth to his character and I suppose does act in a realistic way during his tough tuba life. He is very believable and we are led to feel genuine pity for him.

This is all told during a narration linking each song so in effect its a musical and some of the songs are pleasant and humble. Dick van Dyke voice overs for Tubby in a real Disney fashion.

2 thoughts on “Tubby The Tuba”