You are in: Home > Towering Inferno

In the Seventies, every director had to make a disaster movie, With Airplanes, Ships and Earthquakes on cities a Towering Inferno was yet another way to stick hundreds of big names into a movie and guarantee a blockbuster movie.In 1974 Irwin Allen featured an all-star cast led by Steve McQueen and Paul Newman the big names at the time. 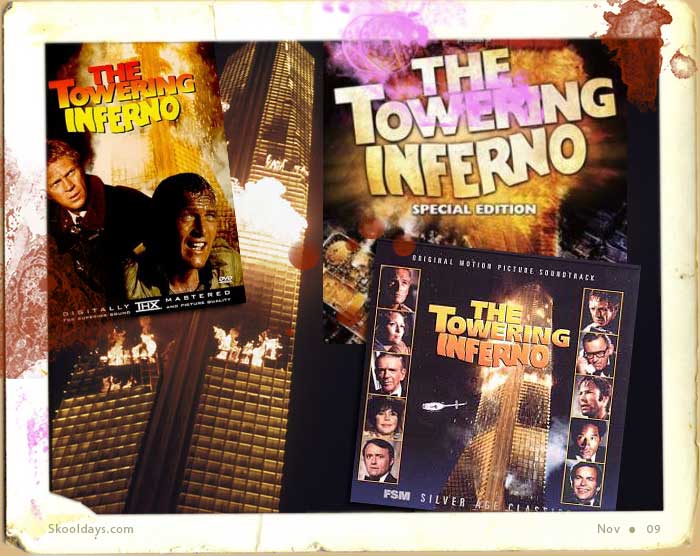 With 138 stories, the skyscraper is the tallest building in the world. The movie is set at the dedication party. Being a new building there are still areas of concern. The power surge also sparks a fire in a storage room on the 81st floor, which because of problems with the building’s security system, goes undetected for many hours.

Of course the last thing anyone would want is an issue on such an important night so its a while before anyone takes it seriously. As the department struggles to fight the spreading fire from inside, the 300 party guests in the 135th floor Promenade Room are trapped. The remainder of the film follows the rescuing of the guests, and depicts many escape attempts and deaths. Rooftop escape by helicopter is abandoned when winds cause the first attempt to crash into the roof and explodes. The tower has only two stairwells. One is filled with smoke and the other is rendered impassable by subsequent explosions and collapses.

A few hundred die in the end and a moral to the story is left behind, in the same way the Titanic and words unsinkable link.

The reason this stood out for me was just seeing so many great actors in the movie. Towering inferno is very Corny, but great for a Saturday afternoon in.