You are in: Home > Totopoly

Your forgiven if you think we have mispelt monopoly only if you have never heard of the Totopoly board game. Apart from the name sounding similar the likeness ends there. 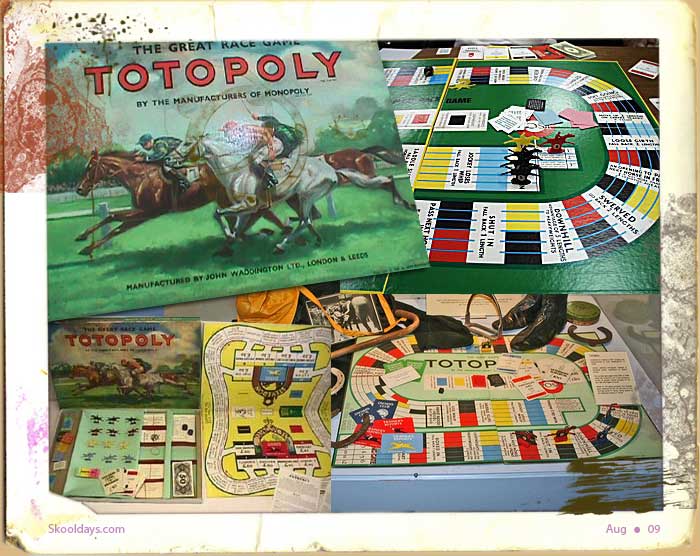 Totopoly is a great game based on the events leading up to, and during, a horse race. Originally made in 1938 by Waddingtons, the game is based on a double-sided board, with each side representing a different half of the game.

The one thing that stands out with Totopoly is the fact its really two games for the price of one. Both sides of the board have there own rules and are very different in nature.

On the training section side of the board, each player has a set of horses, which start and end this phase in one of two stables. The horses are moved around a loop, and, depending on which squares they land on, the player may collect “advantage” and “disadvantage” cards, which become important in the game’s second phase. Some horses may be eliminated during this part of the game. An unusual feature is that each player throws the dice only once in each turn, the same throw being used for all his or her horses.

The horses use the names of the winners of the Lincolnshire Handicap between the years 1926-37. The race, which was first run at Lincoln racecourse in 1853, is now run at Doncaster.

The other side of the board is the racecourse itself. Before starting the race, bets may be placed on any horse the player wishes. During the race, “advantage” cards may be played to improve a horse’s position; also, any “disadvantage” cards held must be used, with the effect of holding a horse back or cancelling an “advantage” card, before the end of the race. As well as the settling of bets, prize money is awarded for first, second and third place.

The winner is the person with the most money – though the rules have often been revised.