You are in: Home > Table Soccer Game

In 1965 a glorified tiddliwinks became what’s known as Table Soccer
My version had a referee in black that could also get in the way! Other versions don’t seem to include this in there content. The game boasted – “Endless Hours of Excitement”. 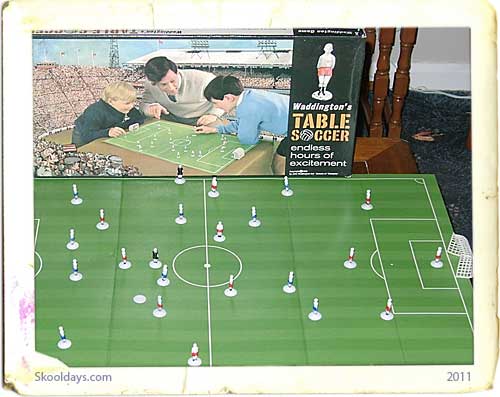 The Game is about scoring goals in a tiddliwinks fashion. Most kids will tell you that before long most teams suffered unrecoverable injuries as adults would walk in on your game and accidently tread on half your team – it wouldn’t be so bad if it was the opposition. Once the player was snapped there was no return – even super glue was to strong and melted the plastic into a stubby player!

The Object of the Game is to Score as Many Goals as Possible,in a Set Time and Try Not to Concede Any!!

The Goals Are Set by Clipping Them Into Place.

The Players Take Their Positions on the Field.

The Ball is Placed.

The Ball is Moved About by Flicking – The Man is Held By One Finger on the Base to Achieve This.

The Rules Are Kept as Near as Possible to the Standard Rules of Soccer With a Few Modification’s.

Dribbling,Shooting,Offsides,Goal Kicks,Corners,Throw in’s and Penalties Are All Parts of the Game.

May the Best Team Win!!

Included in the Soccer Game box: