You are in: Home > Shaker Maker

Shaker Maker
The Shaker Maker sets came in all sorts of characters, from Flintstones to Frankenstiens, Daleks to Disney.

There was also Shaker Maker Pictures such as the Farm and Zoo Animals. This allowed you to make 3-D animals and glue them to different background pictures. It included pictures, paints, brushes, around 10 Magic Mix packets and the plastic moulds.

After Shaking and Making it would come out like a milky jelly like substance then harden over time. They eventually went crusty and shrunk to quarter the size, becoming targets for your neighbours air rifle, like most of our priceless collectable toys did back then if left out on the fence!

Shaker Maker was made by Ideal and was released early seventies. We called the liquid “magic mix” it seemed to be a hit and miss operation sometimes the mix was wrong and it would never harden. 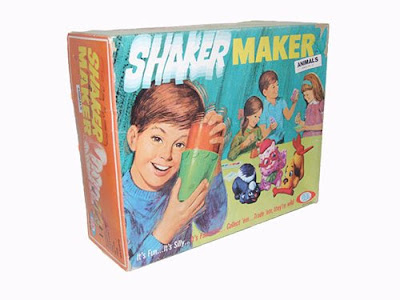 Though this was a massive success as a toy of the Seventies, it did receive a resurge in popularity in the nineties.