You are in: Home > Resin Casting

Resin Casting was a bit of a blast from the past for me. One cold seventies afternoon in the winter, dad came home with a resin casting set. It looked great as you could cast anything you could lay your hands on. Cast moths, cast coins, cast hair, cast nails, cast anything and everything. Suddenly everyone was getting keyrings made of resin and broaches that were worse than Ratners. 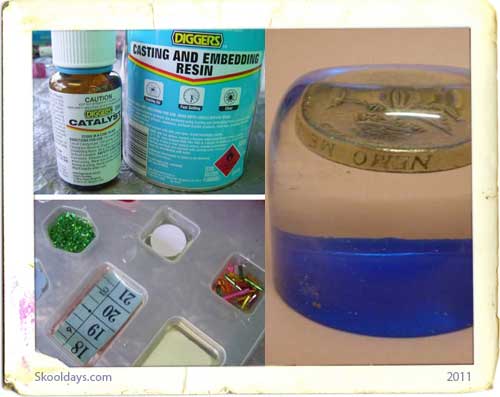 Making resin casts was a creative and popular craft project in the days when i had so much time i was bored! A resin cast is formed when resin and a chemical catalyst are combined to form a hard, plastic-like material. These casts can be customized by pouring resin into molds, adding colors and glitter and embedding tokens. Apparently there are still people out there soing theses resin castings.

skool
Resin figures were made often from polyester resin and is often used to create dolls and other figures. Unlike laminating resin, casting resin dries with a smooth, hard surface perfect for detailed work. The materials used to make them are considered highly toxic and dangerous, and take some skill and practice to successfully master. The resin casting process involves creating a two-part silicone mold of an object into which hot resin is poured and set to harden. All i remember is having to wait overnight for it to set rock hard and no kid has patience like that.
Anyone still casting in resin? i bet you know who you are!