On Thursday Morning Aust 15.1959..Local NYC based tv station WRCA TV Ch.4 create and produced a series that would give advice for housewives and mothers and entertain and educate pre school children. 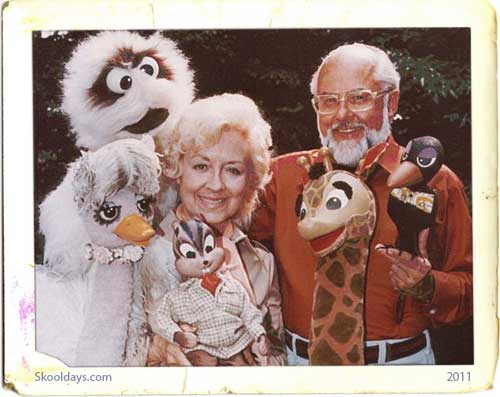 “Hi Mom” featured cooking and child care tips presented by Ms.Josie McCarthy and Ms.Shai Lewis was hired to be the series’ first host/performer and instructor. She would engage her viewers in craftmaking,hobbies, games,songs,stories and magic and puppet skits..sans the films.

Ms.Lewis would continue to mc the show..until she left the program following the Friday March 20,1959 broadcast after a creative dispute with the station execs.

Ventriloquist and movie cartoon voice over performer: Jimmy Weldon became the series second mc.Weldon and his duck puppet:”Webster Webfoot”would entertain and inform their viewers from Monday March 23,1959 to Friday July 17,1959.

By this time..the show’s title had changed to “Family”.

On Monday August 17,1959 Singer/pianist and storyteller: Johnny Andrews became the third host/performer of”Family”. He would engage his viewers in songs,stories,games,and informational segments in between the reruns of tv cartoons.

Andrews would also become involved in comedy banter with The Paul Ashley Puppets.

Andrews and The Paul Ashley Puppets would continue to host”Family”..until they left the series following the Friday August 28,1959 broadcast.

The Ritts Puppets became the series fourth and last hosts/performers of”Family!”..The Ritts Puppets were well known to tv viewers..since the early 1950’s..due to their appearances on CBS TV’s “In The Park”..which was hosted by Philadelphia,Pa based newsman and actor:Bill Sears.The Ritts Puppets began hosting “Family”on Monday August 31,1959.

Paul and Mary Ritts would perform puppets skits that recreated the problems that many children endured in their lives.They would also perform original songs and music and engage their viewers in games,stories,informational segments and interview guest performers and personalities.

The Ritts Puppets would continue to entertain and inform their young viewers..until the station execs at WNBC TV Ch.4 decided to end the show following the Friday September 7,1962 broadcast.