You are in: Home > Birthday House!

They hoped that they would find better acting jobs in NYC.Eventually,he was invited by tv producers:Lester Lewis and Alton Alexander to audition for a new kids tv series that the two showmen were developing for WNBC TV Ch.4 in NYC. 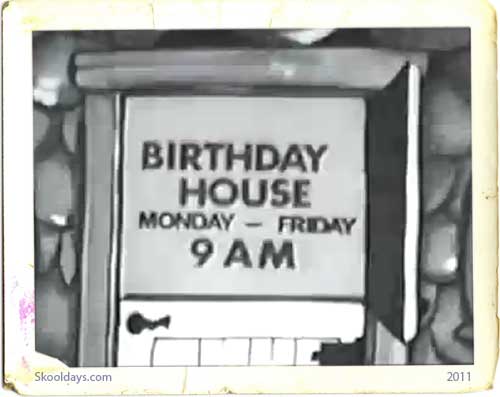 Tripp came to Lewis’ office and won the audition…the heads of Ch.4 picked up the show and”Birthday House”offically opened to the public on Monday morning April 1,1963.

Set against the backdrop of an enchanted cottage in the woods.Tripp and his wife and their two asistants:Jan Lara and Kay Lande would engage a studio audience of pre-school kids in games,songs,stories,craftmaking,informational segments and interviews with guest performers and personalities.

A young fellow with a robot..would demonstarte his abilities to the children and join them and Tripp in the”Every Stretch”exercise song,Actresses:Pat Crowley and Barbara Feldon(Ms.Crowley was then appearing on The NBC/MGM TV version of”Please Don’t Eat The Daises” and Ms.Feldon played secret agent “99” on “The Get Smart Show”) and
Ringling Brothers Circus Clown Lou Jaccobs..would dress up Paul Tripp as a clown on camera.

There was also puppet skits that were performed by Mr.Tom Tichenor and Mr.Tichenor would also appear on the show as “Strawtop The Silent Scarcrow Doll”.

The series also featured drawing lessions with”Whitey The Talking chalk board”,”TC The Talking Toy Chest”would speak to the kids and at the end of the show “Mr.Knock Knock” would give presents to the kids and “Mrs.Oven” would announce that the birthday
cake was ready and Mr.Tripp would bring out the cake..already lit and ready to serve to the children.

Paul Tripp knew how to entertain and educate children..but he also knew how to discipline any child..who may get out of line on the program..in an Interview that I did with him back in October,1979..he recalled..that during the preparations for a game with some pinwheels.

One naughty little boy snatched a pinwheel from the birthday girl..Tripp noticed this and he confronted the brat..”Johnny or whatever the little fellow’s name is? that was a very naughty thing that you did”.

“Remember we’re all here to have fun and to learn here at Birthday House..but we’re also here to learn to share..now..if you don’t have one of these(Tripp held up an extra pinwheel in front of the boy’s face)then I will give one of them to you..but..you must never take anything from anyone and you must never hurt anyone..and you hurt that little girl and that is our little birthday girl”.

The poor little lady was crying and the little boy also began to weep.

Tripp noticed and to deal with it he said”Oh..please don’t cry I don’t want to be sad here at Birthday House..but you should apologize” ..the boy started to aplogize to Mr.Tripp..he stopped him and said”No..not to me..you didn’t hurt me..but you hurt that little girl and that is our birthday girl.”

The little boy returned the pinwheel to the birthday girl..he apologized and the little lady accepted his apology

Tripp then turned the situation around and he said”Now! I want to shake your hand..because it takes real guts to admit that you were wrong and that you were willing to apologize”. The show received alots of postive letters and phone calls from parents and their familes about Tripp’s proper treatment of the situation.

(That interview is sadly lost to history..I am able to recall what Mr.Tripp said to me from memory)

“Birthday House!”was a hit with tv viewers Youg and old and the station execs at WNBC TV won a special citation from The NYC Emmys for the creation,production and presentation of a quality educational children’s tv show in 1964.

The series was seen weekday and saturday mornings both locally on WNBC TV Ch.4 in NYC and in national syndication.

The Tripps would concentrate their activities on writting, producing, directing, staging and performing in plays and musicals overseas.Tripp would also write kids’ books and he would write,produce and narrate a feature length animated version of the children’s musical story that he collaborated on with Mr.George Kleinsinger “Tubby The Tuba” ..the animated feature length version of “Tubby” as first seen on HBO in 1983 and it was also seen on “The Fox Five Kids’ Club’s Christmas Day Party”TV Special on WNYW TV Ch.5 in NYC on Monday December 25,1990.The party was hosted by Craig Marin’s “Flexitoon”
Puppets.

His last tv appearances were on a tv tribute to WCBS TV Ch.2 in NYC to help celebrate the station’s 50th anniversary in 1991 and he played a character named”Mr.Boblob”on a dramatic tv special.