You are in: Home > Bagatelle

Back in the seventies, if you couldn’t afford an Electric Pinball table then the next best thing was a stash of ball bearings and a Bagatelle table. This was always enhanced by the addition of any marbles you could find down the sofa.

The object of the game is to obtain the most points possible by capturing steel balls either in cups or within areas bordered by metal pins. This is achieved by striking steel balls with a wooden cue up from a narrow channel and allowing them to cascade back down the board into traps or cups.

From my knowledge there were two main types of tables. The manual stick technique or the deluxe spring version. I was a lucky blighter as mine used the spring and with a full thrust bent several pins on the table as I launched the metal ball bearing bullets as hard as I could. (Never facing the TV set though – parents house rule). 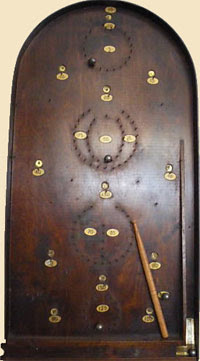 For proper play, the top of the board should be raised upon a support on the table so that the bottom of the board sits on the table and the entire board slants downward toward the player. Like most standard tabletop Bagatelle games, this game was designed for a right-handed player. On the right side of the board is a Runway – a covered wooden channel, in which to place a marble. The function of the Runway is to direct the marble to the top surface of the board. When a marble is placed in the Runway and the board is properly slanted, the marble rolls down the Runway and rests against a Plunger – a spring-loaded cylindrical rod which when operated by the player, propels the marble up the Runway.

When a player pulls the Bagatelle plunger and releases it, the plunger cylinder hits the marble, propels it up the Bagatelle runway, and then gravity takes over and the marble rolls down the slated board surface. The degree of propulsive force upon the marble is dependent upon how far out a player extents the Plunger from the board and how quickly the Plunger is released. Different degrees of force cause the marble (during its decent on the board surface) to rebound against the sides of the board and against the embedded nails which act as deflectors. As the marble rebounds against the nails it rolls down the board’s surface, it either falls into a target area (resulting in a player accumulating scoring points as marked in the areas), or the marble comes to rest at the notched bottom of the board which also has painted scoring values for each notch.

There were also some rules about if the ball hits the 3 pin area it is allowed to be reused and if a ball lands at rest in the 3 pin area, all balls are allowed in play that are currently at rest at the foot of the table without a scoring position.