You are in: Home > Art Deco

Words like Jazzy and Cool came into ther own in the 1920s during the Art Deco era. From its origins in Europe during the first decade of the 20th century, the Art Deco movement quickly spread to the United States, where it remained a popular and pervasive style through the mid-1930s. The Art Deco aesthetic is characterized by graceful, stylized and geometric shapes, often in symmetrical arrangements. If you’ve seen the Chrysler Building in New York City, you’ve seen one of the most spectacular examples of Art Deco architecture. 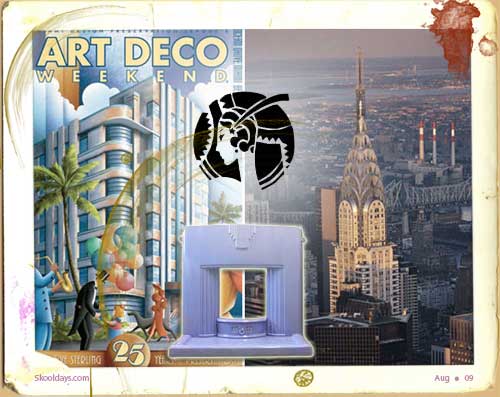 In the 1920s and 1930s one of the most fashionable furniture styles was named Art Deco, after L’Exposition Internationale des Arts Decoratifs et Industriels Modernes, held in Paris in 1925. The finest Art Deco furniture was luxurious, made of exotic woods like macassar ebony and Caucasian burr walnut, and decorated with ivory and shagreen, an untanned leather.

Today there is some demand as can be seen from this Art Deco fireplace remolded from a 1950s model. Art Deco will no doubt come back in the future as it has a very strong design and is extemely noticable. So when the time is right….